Stars forward Grant Jozefek has helped Lincoln climb to first in the standings, while the first year NHL Draft-eligible forward continues to lead his draft class. 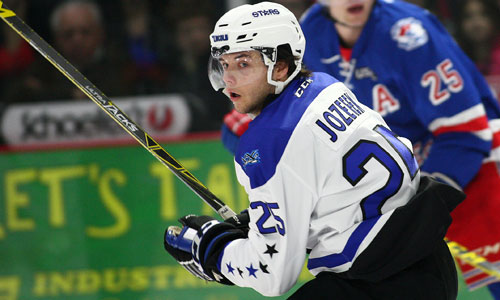 On paper Lincoln Stars forward Grant Jozefek may not jump out at NHL scouts. Luckily, hockey is played on ice and not paper.

The five-foot-nine, 176-pound winger missed the 2015 NHL Draft cutoff date by four weeks last season. Jozefek, originally drafted and traded by the Muskegon Lumberjacks, was one of many young forwards on the Stars last season, as they endured a last place finished with an 18-37-5 record. His 26 points (4G 22A) would be good enough for seventh in team scoring.

Jozefek was banged up, and so was the team.

“When I came to the USHL I knew it would be tough being undersized,” Jozefek said. “I got a pretty good hit in the corner and was out for a while. It was my first wake up call to how fast and strong everyone is in this league.”

“Grant had a great summer and put himself in a position to succeed,” Hull said. “His on ice success is no fluke. His ability to possess and distribute the puck at a high speed is a great thing to watch, and as we are learning, when Grant shoots the puck he becomes that much more dynamic.”

That on ice success has translated to Jozefek being the leading scoring for first year NHL Draft-eligible players in the USHL, and ranks him third overall in USHL scoring with 13 points. His five goals have already surpassed last season’s total. Despite all of the individual and team success Jozefek and the first place Stars have achieved one month into the season, he remains level-headed with goals in mind.

“My goal this year was to have a consistent pace to my game and not to have any lapses like I did last year,” Jozefek said. “I really want this team to make playoffs since we went through so much last year. We want to be Clark Cup contenders.”

Contending for a Clark Cup goes beyond winning for the locker room. Jozefek noted how he knew the fans and front office were enduring a tough season last year as well, and thanked the coaching staff for being patient with the young group they had.

The Lincoln Stars are one of the more historic franchises in the USHL. Since their inaugural season in 1996, the Stars have won the Clark Cup twice and the Anderson Cup three times. The last time either was won was during the 2002-03 season when future NHL forwards David Backes and Ryan Potulny led the team to a sweep of USHL awards. Since that season, notable alumni such as Boston Bruins forward Jimmy Hayes, Columbus Blue Jackets forward Jared Boll, Vancouver Canucks defenseman Matt Bartkowski, Anaheim Ducks prospect Kevin Roy and Los Angeles Kings prospect Paul LaDue have all played in the famous Ice Box Arena. Roy, currently playing in his senior season at Northeastern University, still remains the only player to score 50 goals and 100 points in a single season during the Tier 1 era (2002-present). Jozefek will follow Roy after this season and plans to play college hockey at Northeastern University.

“It’s cool to see guys like Roy and Backes come through the organization,” Jozefek said. “Roy is a senior now and I would have loved to play with him. It’d be nice if I can follow in his footsteps.”

Early season projections from the NHL Central Scouting Preliminary list in September left Jozefek off the list of A, B and C-rated skaters. Preseason USA Hockey Magazine USHL Power Rankings had the Lincoln Stars ranked 16 out of 17 teams. Jozefek laughed at the reminder of pre-season projections and relates back to his youth days before a USHL team drafted him.

“I ignore the lists. I ignored the USHL Draft and OHL Draft lists and let everything just happen,” Jozefek said. “I focus on my game every night on how to be successful. If people like what they see it’s great, but it won’t change who I am on the ice.”

The Lincoln Stars don’t want him to change. The young forward and Lincoln may have preferred to fly under the radar this season, but it won’t be much longer until everyone starts to take notice. In the most recent USA Hockey Magazine USHL Power Rankings the Lincoln Stars were ranked first after receiving nine first-place votes. Jozefek’s early individual success may alert some NHL scouts as well.

“I wish people could see the work that Grant puts into his game everyday,” Hull said. “When your best players are your hardest workers on and off the ice, that’s how you build a winning culture. He’s a guy you want on your team and in your dressing room. It’s easy to root for players who love to play.”