Waterloo Black Hawks forward Shane Bowers has only skated in the USHL for two months, but he is already showing why NHL scouts have closely watched the young center. 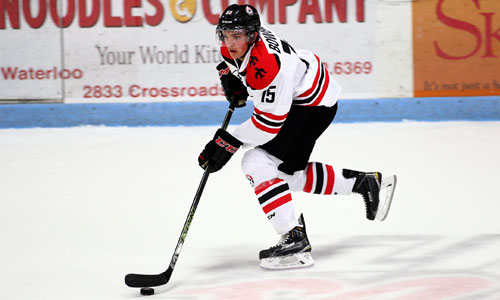 May 4, 2015 was the start date of the two-day marathon that is the USHL Draft. The first day, Phase I of the USHL Draft, saw 160 players born in the year 1999 selected by USHL teams. The USHL Media Department had prepared over 500 scouting reports and television graphics for the live USHL Draft show that evening, but there was one name flying under the radar that was not included.

“I was watching the live show online with my parents when they called my name,” Bowers recalled. “It was pretty funny because no one really knew who I was. All the American kids had photos on the show and then they got to me. It was still exciting.”

The 6’1” 170-pound forward from Halifax, NS was a well-known name in Canada. Bowers was drafted fourth overall in the QMJHL Entry Draft, but wanted to keep his options open with the possibility of playing in the USHL and develop further with college hockey after his junior hockey career.

After hearing his name selected 55 minutes into the show, Bowers quickly went to his computer to find out more information about Waterloo, IA.

“I didn’t know much about the league or Waterloo,” Bowers said. “At the beginning of summer [after I was drafted] I decided it’d be good for me to try out there. After I did some research about the town and organization I was really looking forward to getting to Waterloo, meeting my teammates, seeing the rink and meeting my billet family.”

Waterloo Black Hawks head coach P.K. O’Handley liked what he saw out of the young forward early in camp, and decided to add Bowers to a roster that already included 16-year old defenseman Mikey Anderson. Since the 2002-03 season when O’Handley was introduced as head coach of Waterloo, 26 different Black Hawks have been selected in the NHL Draft including Vancouver Canuck’s 2015 first round pick Brock Boeser

“We spend a lot of time here talking about tradition and who came before and striving and chasing excellence,” O’Handley said. “I believe Shane at 16 is doing that because he understands what he can become. I don’t believe anyone gets there without taking care of the process and the details of the journey. Shane has embraced that, as have a lot of our guys in the past. If he stays with it the reward for Shane will be great.”

Some of those early details are good indications of what could come for the young center. Since 2012 when the USHL introduced the modern tender process, 68 forwards have played as 16-year olds for a full season. 21 of those players have gone on to be NHL Draft picks, not including the 21 forwards eligible for the 2016 NHL Draft this season. 12 were first or second round NHL Draft picks, and eight have been projected by NHL Central Scouting to be a first or second round pick in 2016.

In terms of success on the scoresheet, six 16-year old forwards that produced 25 points or more in their rookie season went on to be a first or second round NHL Draft pick, in addition to 2016 NHL Draft-eligible forwards Kieffer Bellows, Clayton Keller and Willie Knierim. In his first 10 games this season, Bowers has already produced five points skating as a third line center behind Carolina Hurricanes prospect David Cotton and 18-year old Ronnie Hein. Only three other 16-year old forwards have more points than Bowers this season, and both play wing, typically an easier position to transition to in the league. In fact, the USHL's 16-year old rookie scoring record is held by Bellows and Nick Schmaltz, both of which had five points in their first 10 games. Both would go on to score 52 points.

“As a general rule it’s difficult for a young guy as he is working on his strength, working on his maturity, working on getting mentally strong and doing everything he can to get better every day in a very good league,” O’Handley noted. “He’s also at an age where the rigors of school and expectations of excellence come into play. Shane is an elite kid and an elite hockey player at his age.”

“P.K. has been telling me all along that he sees it coming game-by-game,” Bowers added.

As a junior in high school, Bowers has had to find balance between school and hockey. That can be difficult at times with media obligations in between school and practice, or class projects that are due after traveling on a team bus all weekend. Just three weeks ago Bowers traveled out of the country and was playing in the Under-17 World Challenge in Dawson Creek, BC as a captain for Canada Black.

“It’s always an honor to represent your country and it’s a big honor to be named captain,” Bowers said. “It made my job easy because everyone in that locker room could have had a ‘C’ or ‘A’ on their jersey, and probably have at some point in their career. Anyone could wear a letter on that team.”

The maturity and composure is something that NHL scouts may take note of when they talk to Bowers or O’Handley. The reality of living under a microscope away from friends and family, as potential NHL teams watch your every move, is something most 16-year olds aren’t ready for. O’Handley speaks with Bowers every day about hockey, school and life to make sure his young forward keeps developing in all aspects of his game. Bowers seems up to the challenge.

“Being away from home for the first time is hard,” Bowers said. “You have your bad days and good days and it’s a sacrifice, but it’ll be worth it in the end and an unforgettable experience.”

Bowers knows too that he has something more important at stake this season with his teammates. He admits that he hasn’t paid too much attention to his individual stats, but has followed O’Handley’s advice and only wants to play his best every night. Six months ago Bowers didn’t know anything about the USHL. Now, he wants to win a Clark Cup.

As for his early impressions of the USHL and his team, Bowers was very complimentary to the developmental environment. In his first two months of the season he already noted the high level of talent and the lack of time he has to make decisions with the high-pace level of play.

“It’s a great league. You’re being watched every night and is a great developmental league,” Bowers said of the USHL. “More NHLers are coming out of the USHL and it just shows they can compete with the top leagues in the world.”