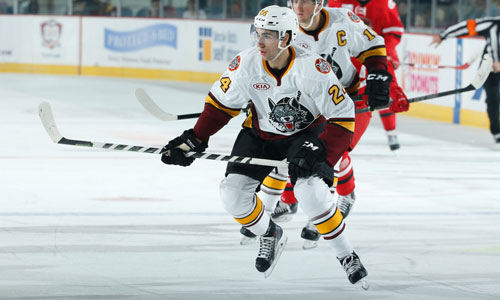 Three years ago defenseman Jordan Schmaltz heard his name called over the public address system in Consol Energy Center on day one of the NHL Draft. Schmaltz had just won a Clark Cup with the Green Bay Gamblers two months earlier, and was excited to begin his college hockey career at the University of North Dakota. Today, the recently turned 22-year old defenseman is back where his hockey journey started: Chicago.

Schmaltz was a USHL Phase I Draft pick of the Sioux City Musketeers in 2009. Prior to a two-year career in the USHL, Schmaltz played with the Chicago Mission for four seasons where he first caught the eye of USHL scouts.

The Veroni, WI native is now skating in his first pro season with the Chicago Wolves (AHL) in the St. Louis Blues organization. With the average age of NHL rookies coming between 22 and 23-years old, and the age of rookie defensemen set even higher, Schmaltz is right on track in terms of NHL development.

“I’m right back where it all started,” Schmaltz said grinning. “I’m familiar with the area and know a lot of people around here. Bob Nardella’s kid played with my brother, so I know him and now he’s the Wolves skills coach. It’s funny how those things work.”

Familiar faces, such as Nardella’s, have helped Schmaltz ease into his first season as a professional hockey player. Schmaltz currently ranks fifth among AHL rookie defensemen in scoring with 10 points, and has played a major role in the early success of the Wolves this season.

Another pleasant surprise in his first pro season has been the familiarity of former teammates and opponents that he had seen during his college hockey and USHL careers including fellow Clark Cup champion Alex Broadhurst.

“Anytime you win a championship it’s fun and especially with the team we had,” Schmaltz said. “We had unbelievable captains, third year guys like Grant Arnold and Max Hartner, and skilled guys like Broadhurst. I still talk with those guys today.

It was really fun to put together that run. We didn’t lose a lot that year.”

Schmaltz credits the USHL and college hockey to helping him develop into the hockey player he is today. As a defenseman, he noted that playing against the “Johnny Hockey line” that included Johnny Gaudreau, Zemgus Girgensons and Vinny Saponari was one of the more difficult tasks during his junior career. As for college, Schmaltz believes it made him ready for the next level.

“College is the best time of your life,” Schmaltz said. “At 18 I wasn’t ready to come [play pro]. Going to college helped me get stronger and developed with more workouts and less games. It helped me move on to the next level.”