Scott Powers talks with NHL scouts about why Dubuque Fighting Saints forward Willie Knierim has been identified as a rising commodity in the upcoming NHL Draft. 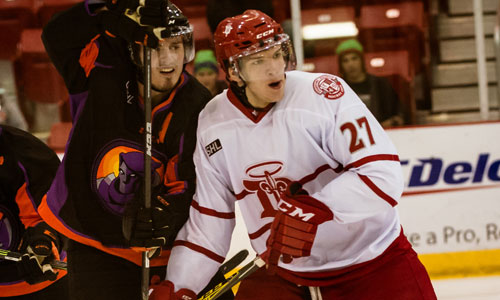 Before anyone sees Willie Knierim actually play, there’s always that first thought about him as he steps foot onto the ice.

As one NHL Western Conference scout recently put it about the Dubuque Fighting Saints forward, “His size grabs you right away.”

Knierim has size and plenty of it at 17-years old. He’s not only tall at 6-foot-3, but he also has the weight and strength to go with it at 220 pounds. He certainly looks like an NHL power forward already.

Knierim’s size got him on radars, but it’s what he can already do with that size and how he projects that has ignited the interest and boosted his draft stock. ISS Hockey’s December rankings placed him at No. 23 among 2016 draft-eligible players, and more and more NHL personnel are constantly seeing him.

One Eastern Conference assistant general manager recently showed up to an away game to give Knierim a closer look. Like everyone else, the assistant GM led with that same initial takeaway.

“He possesses real good size,” he said. “He gets up and down the ice well for a big man. He has a physical element to his game.”

Knierim isn’t a finished product, but he does think and react how NHL personnel like power forwards to. He knows he has to get around the net and cause havoc. He knows he can’t be timid about throwing his body around.

“He plays hard and likes traffic,” one scout said.

Dubuque coach and general manager Jason Lammers was also impressed with Knierim’s knowledge and game when he first saw it. Lammers has tried to expand on it.

“I think he has some of that in place because it’s a mentality for sure you have to have,” Lammers said. “It is something he has been taught and something that we want to continue to teach as we move forward of just how to attack the net as a big body and attacking the D, the space behind them and attacking their heels and putting pucks behind people.”

#27 Willie Knierim starts and finishes a play for his 10th point in 19 games this season.

Knierim has embraced watching Minnesota Wild forward Charlie Coyle as an example of being a prototypical NHL power forward. Coyle is the type of player he wants to develop into.

“I think I’m a big-bodied power forward who takes the puck to the net,” said Knierim, who is originally from the Chicago suburb of Skokie. “I play an honest game. I like to sit in front of the net and disrupt goalie’s vision. I think that game can translate to any level.”

Another reason why NHL scouts like Knierim’s potential is because the next level for him is college. He’ll attend Miami University next season. Scouts see him as a player who their organizations can be patient with and allow him the time to work on his skills. Knierim knows first off he has to become a better skater.

“Definitely my skating, I’ve known that for awhile,” said Knierim, who will play for the U.S. Junior Select Team in the World Junior A Challenge later this month. “I have to be faster and quicker. If I can do that, I think I can be a really good player. I just got to keep working on that.”

Scouts don’t seem worried about it. They feel like he can eventually get to where he needs to be in that area.

“His skating is okay,” one scout said. “It should get better. He’s had a lot of growing the last couple years.”

Knierim wouldn’t lie about the future; the draft is on his mind. The NHL has been his ultimate dream ever since he watched the Chicago Blackhawks lift the Stanley Cup in 2010. Lammers has liked how Knierim doesn’t appear to be getting caught up in the hype, though.

“I think the progression in his game is just the mindset of now he’s got some publicity behind him and handling success can be challenging,” Lammers said. “That’s what I’ve noticed about him is he’s kind of turned the page. It’s all nice and it all sounds good, but he’s looking forward to having his actions speak for him.

“Your attitude determines your altitude. His mindset is just focusing on what he can control and working hard to improve his game and putting the work in every day.”

Editor's Note: Willie Knierim has hosted a NHL.com blog alongside Mike Morreale this season with a behind-the-scenes look at the Dubuque Fighting Saints. You can read his latest post about his Thanksgiving Day plans and game day superstitions HERE.