Chicago Steel forward Max Zimmer is known for his top-tier speed on the ice, but it's his improved two-way game that is attracting NHL scouts to watch his game. 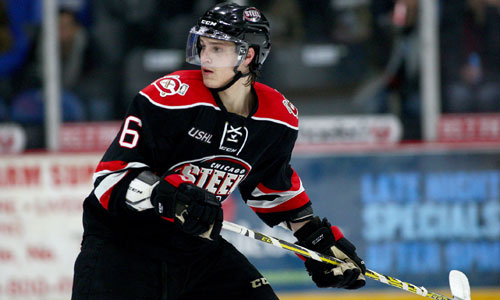 Chicago Steel forward Max Zimmer has no doubt the points will come.

Of course, it’s always frustrating when they aren’t coming, especially when you have hit as many posts as he has this USHL season. But while fighting through an early-season scoring slump, he’s turned his attention to making sure he’s solid everywhere else.

Zimmer’s speed and skating ability are what most NHL teams are attracted to and are big reasons why he’s projected as an early-round pick in the 2016 draft. Yet, his goal is to take those skills and turn himself into a well-rounded two-way forward.

READ: Diabetes an Opportunity, Not Obstacle for Max Zimmer

“I think definitely being a two-way player is going to help you at every single level you’re at, especially going forward,” said Zimmer, who is 6-foot and 185 pounds. “They don’t want just offensive guys or defensive guys. They kind of want a mix of some guys who can play offense and score goals and guys who can come back and play solid defense.

“Right now sometimes when you’re not scoring goals or not producing as much on the offensive side, you have to focus on defense first. Hopefully defense will lead to offense. I think that’s been a focal point especially this year hammering down on D and playing solid D and hopeful the D will lead to goals.”

Steel coach Dan Muse is also more than confident Zimmer will eventually break through with the production. Muse’s focus has been on working with Zimmer on how to best utilize his speed, work on that all-around game and on his play away from the puck. Zimmer has been getting a chance to play in all situations with the Steel. He plays on one of the top lines and is on the power play and penalty kill.

Part of that learning process for Zimmer has been making adjustments to the level he’s at now. He played most of last season for Wayzata High School in Minnesota and appeared in just eight USHL games. This season he moved to the USHL completely.

“When making that jump, there’s going to be adjustments right away,” Muse said. “Max knows it. I think the thing that really stood out for me is how coachable he is and his willingness and eagerness to learn. He wants to be an all-around player. He wants to improve in those areas. It isn’t that he hasn’t worked on that in the past. It’s he hasn’t had to work as much on it in the past.

“Definitely seeing every game steps in the right direction. He’s doing a better job of getting in lanes defensively, getting to the point positions to block shots.”

Zimmer chose the USHL route because of the potential to develop in all facets of the game.

“I think this is definitely the best league in North America,” said Zimmer, who will play for the U.S. Junior Select Team at the World Junior A Challenge next week. “All of the success and all of the players that come out of this league in the last 10-20 years is phenomenal. It’s easily one of the most all-around leagues. When you look at other leagues, it’s more focused on offense or defense. This is more like an all-around game where you focus on both.”

NHL scouts are optimistic about Zimmer’s ceiling. He turned 18 on Oct. 28 and will have another USHL season before playing at the University of Wisconsin beginning in the 2017-18 season.

“I like how he projects,” one NHL Western Conference scout said. “He’s a smart player with a real good skill set. He can really skate.”

An Eastern Conference assistant general manager said of him, “He has skill and a good hockey sense. He does the little things well. He can make a play.”

That’s the thing. Zimmer may not be putting up the numbers he’d desire, but he’s still making plays. Opponents always have to keep an eye on him, which is often harder said than done.

“I think the thing that stands out the first time you watch him is his speed,” Muse said. “He’s got excellent speed. He’s great on his edges. He can really separate from opponents. That can really stand out.

“He’s got a strong shot. His shot’s a threat, but he’s also a threat to make plays. He’s got a little 1-2 punch there in terms of how he pressures the offense. At times, he can kind of slow down a little bit, but he can really attack with speed as well. He’s working on using all those tools consistently now.”

Again, Muse has no doubt Zimmer will reach those expectations because of his skill set and work ethic.