40 players were named to the USHL/NHL Top Prospects Game taking place at Ralston Arena in Omaha, NE, home of the Omaha Lancers. 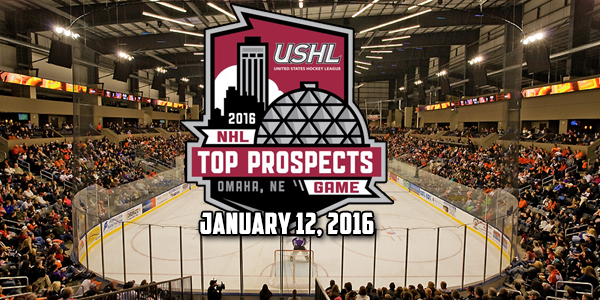 The United States Hockey League and NHL Central Scouting announced the players selected to compete in the 2016 USHL/NHL Top Prospects Game that will take place on January 12th in Omaha, NE at Ralston Arena, home of the USHL’s Omaha Lancers.

The selection process for players competing in the game was completed in cooperation with NHL general managers and scouts, NHL Central Scouting and USHL general managers. All 40 players chosen are eligible for the 2016 NHL Draft, including 27 players that are in their first year of eligibility for the NHL Draft.

“After a record-breaking NHL Draft in 2015 in which no junior league in the world had more draft picks than the USHL this should be a momentous year for the league and the USHL/NHL Top Prospects Game,” said Bob Fallen, USHL President and Commissioner. “By being selected for the event, these players have already captured the attention of NHL scouts, and the game provides them another opportunity to be evaluated among the best talent in their age group.”

Among the players selected to compete are Michael Boyle (Sioux City Musketeers), William Knierim (Dubuque Fighting Saints), Andrew Peeke (Green Bay Gamblers), Sam Rossini (Waterloo Black Hawks) and Max Zimmer (Chicago Steel), all of whom are ranked as “B” ranked skaters on the “Players to Watch List” by NHL Central Scouting, meaning they are likely to be candidates to be selected in the second or third round of the 2016 NHL Draft. In total, 24 of the 40 players selected for the game are on the “Players to Watch List” released by NHL Central Scouting in late November.

“The USHL/NHL Top Prospects Game provides a unique opportunity for the management and scouts of the 30 NHL teams to view the top USHL talent available for the 2016 NHL Draft. The prospects are encouraged to showcase their skills and abilities amongst their peers in this competitive and entertaining environment that brings out their best,” said Dan Marr, Director of NHL Central Scouting.

The 40 players will be split into two 20-man teams – Team East and Team West – for the 2016 USHL/NHL Top Prospects Game, and the teams mostly will represent a split of players currently competing in the USHL’s Eastern Conference and Western Conference. The final rosters, along with coaches and support staff will be announced at a later date.

2016 marks the fourth time the USHL will be hosting the USHL/NHL Top Prospects Game, and it follows a record-setting 2015 NHL Draft that saw 37 players from the 2014-15 season selected by NHL teams. The 2016 NHL Draft will be held June 24-25 in Buffalo, NY at the First Niagara Center, home of the NHL’s Buffalo Sabres. Fans can purchase tickets to the game HERE, and any media credential requests should be sent to HERE.

BOUND FOR THE HALL OF FAME: Beginning this year, the first goal scored in every USHL/NHL Top Prospects Game will be forever enshrined in the Hockey Hall of Fame in Toronto, Ontario. The jersey, gloves, stick and puck will be packaged following the game and delivered to the Hall of Fame…  Previous first-goal scorers in past years include Kevin Conley (Youngstown Phantoms) in 2015, Conor McGlynn (Sioux City Musketeers) in 2013 and A.J. Michaelson (Waterloo Black Hawks) in 2012.

ROOKIE SENSATION: Youngstown Phantoms forward Cameron Morrison will be 17 years, four months and 16 days old on January 12, 2016, the youngest player in the Top Prospects Game. Morrison leads all rookies and the USHL with 29 points in 24 games this season.

INTERNATIONAL TALENT: Seven players are considered imports, with four natives from Canada. Other countries include Norway and Sweden…  Canadians Wade Allison (Tri-City Storm) and Michael O’Leary (Dubuque Fighting Saints) both played in American youth programs prior to the USHL.

HOMECOMING: Lincoln Stars defenseman Christian Evers (Lincoln Stars) and Allison both played in Omaha, NE with the Omaha AAA program. Neither player has scored in Omaha during their USHL careers since their time in the NAPHL program.

FAMILIAR FACE: Chicago Steel forward Laczynski is the only player select to have played in the 2015 USHL/NHL Top Prospects Game in Dubuque, IA. Laczynski was one of three players credited with two assists in the game…  Laczynski won 2014-15 USHL All-Rookie Second Team honors last season after scoring 46 points in 57 games including 18 goals. This season the Ohio State University commit has 23 points in 21 games, including six goals.