Home is Where the Hockey is for Daniel Vladar

Boston Bruins prospect Daniel Vladar has sacrificed much already in his first USHL season with the Chicago Steel, but it's all for one goal: the NHL. 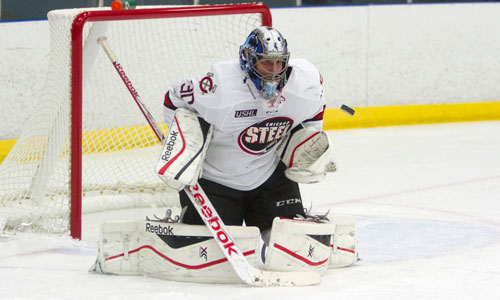 Ask any given wide-eyed, bushy-tailed budding junior hockey player what his dream is, and nine times out of ten he’ll tell you it’s to play in the NHL. In this regard, Daniel Vladar, an 18-year-old goaltender from the Czech Republic, is no different from the rest. At the 2015 NHL Draft in Sunrise, Florida, Daniel was one step closer to that coveted dream of playing hockey in the most esteemed professional ice hockey league in the world. In the third round of the draft, Daniel was selected 75th overall by the Boston Bruins.

But for Daniel, achieving that ultimate goal requires sacrifices that started at an early age. Sure, he’s given up hours upon hours of free time to perfect his craft. Everyone else in the game has, too. Daniel, however, has completely altered the way he defines and perceives his concept of home.

Daniel’s now a resident of the United States, thousands of miles from his parents in Prague playing for the Chicago Steel of the USHL. He’s been thrown into a culture completely different from that of the Czech Republic, all the while learning to speak a new language and establish an entirely new life as an independent adult. That might sound daunting for just about anyone, but on top of all of that, Daniel is expected to backstop an elite junior hockey team with the consistency and expertise of an NHL draftee.

At the foundation of Daniel’s ability to perform is the West family. They’re Daniel’s billet family, and they have created a sense comfort and stability for the 6’5, 185 pound gangly goalie who is constantly on the go. And he’s on his own schedule, too. On a Thursday morning at 7 a.m. in mid October, his billet siblings Brynne, Liam, Blair and Brooke West were leaving for school. Daniel wouldn’t even be awake for at least another two hours.

While getting ready for school, Blair West claimed she never sees Daniel. She quickly elaborated, admitting she sees him “only at night because he likes to stay up to wait for us before we go to sleep.”

Once the kids left for school from their home in River Forest, Illinois, Karen West discussed her experience as a host mother to a foreign athlete and, of course, a biological mother to an additional four children.

“My friends think I’m crazy. [They say,] ‘Really, you’re gonna bring in somebody else?’ Like, we have the space, it’s the right thing to do!” she exclaimed, laughing. “You know, just to have somebody else in the family, and around, and a big brother. When we took this on, I didn’t expect to feel motherly toward them. I’m thinking they’re grown men, they’re on their own, they’re playing hockey, whatever. But they really are still kids.”

At 9 a.m., Karen shot Daniel a text message to figure out if he was awake. Daniel’s iPhone sends read receipts every time he sees a text message, which has been a nifty tool for Karen. Roughly fifteen minutes later, Daniel wanders into the kitchen to fuel up before practice with the Steel at 2 p.m.

After Daniel eats breakfast, Karen decides to show Daniel the family’s pet rabbits for the first time, although he had been living with the Wests for over a month. It’s clear that Daniel felt comfortable there, despite his hectic life. Karen and Daniel have the chemistry of mother and son, complete with humorous banter and relentless joking.

“The black one and brown one, yeah. I think that one’s…” Karen trailed off, struggling to recall the names of each rabbit.

Karen laughed, smacking Daniel playfully on the shoulder. “Buttercup and Charlotte. Shut up!”

Soon afterwards, Daniel left to catch a train to Geneva, Illinois, the location of the Steel’s rink. Typically, he simply messages friends on his phone or listens to music during his commute, but on that day, Daniel took the time to reflect on what it’s like to feel torn between two countries.

“My real home is, like, back home. But, everybody’s always saying ‘home sweet home,’ but… that’s not me,” Daniel admitted. “My dream is to play hockey. Right now I am feeling home right here. But, of course, in my heart I am home back home in Prague."

Daniel needed to mature quickly to step out of his comfort zone and move permanently to the United States. While the Wests have created a welcoming and supportive environment for the goaltender, he confessed that he misses the relaxed culture of Prague. Americans, he claimed, are constantly doing something.

“On Sunday, we always have a day off. Everyone is doing nothing, only just spending time with the family,” he said about his home country. “Here, every Sunday it’s so busy. I don’t feel sad in a normal week, but every Sunday I miss home. “

He arrived at the rink, and while Daniel grapples with his cultural identity, his confidence on the ice was evident as he warmed up for practice. He was agile and flexible, gliding quickly from post to post, cutting off imaginary players from every angle. Daniel feels a bit like a nomad off the ice, but in that moment at Fox Valley Ice Arena, he’s completely secure.

Right now, home is with teammates and coaches in Chicago with the Steel, but in due time, home will be Boston, Massachusetts. Home will be TD Garden. For Daniel Vladar, home is where the hockey is.

Editor’s Note: Olivia Reiner is an undergraduate student in the Medill School of Journalism at Northwestern University (2018). Reiner’s interview with Vladar was originally posted as a podcast for a class project, which can be heard in its entirety below.