Coast to Coast: Jake Slaker leaving his mark on Bloomington 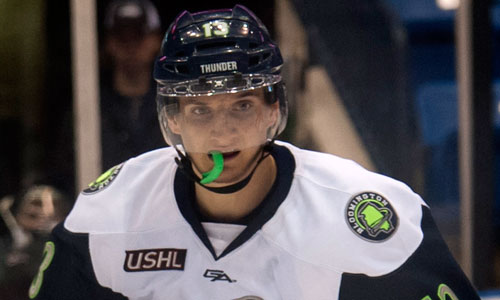 In their second United States Hockey League season, the Bloomington Thunder have held a constant entity to their team: the captain. Second year forward Jake Slaker took hold of the role and began his tenure as the second Thunder captain in team history prior to the team’s sophomore season. Having developed a relationship with Thunder head coach and general manager Dennis Williams, Slaker became not only the top man for the job, but the perfect man.

“When you look at a captain and the face of a franchise, Jake is that. He is exactly what we look for in a Bloomington hockey player and does above and beyond that,” said Williams in an interview after naming Slaker to his leadership role at the end of August.

During his first USHL season, Slaker scored 25 points (13g, 12a) making him the top-returning scorer for the Thunder. His leadership qualities in the locker room on top of his on ice success garnered himself the 2014 Most Improved Player Bloomington Thunder award. During the offseason the established forward announced his commitment to St. Lawrence University. Since then he has posted 16 points (7g, 9a) for the Thunder, signed his national letter of intent, and helped the team to a 21-12-3-1 record through the halfway point of the season.

Coming into the league, Slaker was one of the priorities for the Thunder before the expansion draft. Playing just two games for the Fargo Force, Slaker was brought to Bloomington on a trade to help him become a cornerstone of the organization from day one. “I knew it was the best league in the country, so it was a big thing for me. I knew that summer I was going to play in the USHL and I wasn’t going to let anybody stop me from it,” said Slaker who was determined to make it in the Tier-I league with the Thunder.

To understand exactly who Jake Slaker is, it is important to know where he comes from. Originally born in Georgia, the Thunder forward spent the first part of his life just outside of Atlanta. It was there that his father, Dirk, helped introduce the youngster to the sport. As a native of San Diego, CA, the elder Slaker learned how to play thanks to the original San Diego Gulls of the Western Hockey League.

“He grew up in California, so hockey wasn’t really around him,” said Jake. “(When the Gulls started), a bunch of the pro players actually lived in the same neighborhood as him, so they passed gear down to him. He got to start playing that way for fun.”

Once the family left the west coast and came to Georgia, Dirk’s love for the game still remained with him. He became the team doctor for the Atlanta Knights, who played in the International Hockey League (IHL) from 1992 to 1996.

“I was just all around it growing up. My brothers played too,” said Slaker, the youngest of five with two brothers and two sisters. However, while living in Georgia, the Thunder captain didn’t hit the ice right away.

“I played roller hockey there. I didn’t step on ice skates until I was eight, when I actually got to California, which was weird when you think about it,” chuckled Slaker who transitioned to San Diego and another chapter of his life. Thanks to the support of his family and his father, who Slaker credits as his biggest inspiration, the game grew in his eyes as well.

Eventually, hockey became not just something he enjoyed; it was something he was good at. The decision was made for the now 5-foot-10 forward to make another move, this time to Chicago for the end of his youth hockey career. After playing in the Chicago Fury system for three seasons, Slaker moved to Belle Tire when he was 17-years old. It paid off as the center averaged over a point-per-game and was the top scorer for the team with 38 points (16G, 22A). He was also named assistant captain of the Michigan triple-A team, foreshadowing his leadership on a larger stage.

“For most kids you would think it is hard, but for guys who play hockey it becomes pretty easy,” said Slaker on the movement. “You’re always with teammates and meet new friends through the game. I think it helped make me who I am today because I had to be more social and personable to meet new people and make new friends.”

Being home is something Slaker associates with being around his family rather than a location. The same can be said about his team. Home isn’t where the team is located on any given practice or game. It is wherever the team is together: on the bus, in the hotel or locker room, or on the ice. Needless to say Slaker has found his home with the Bloomington Thunder and has relished the chance to be a part of both the USHL and the organization.

Now on the verge of his collegiate career, the young man has found a comfortable place and situation in Bloomington to finish his junior hockey career. He’ll return to the east coast once his freshman year begins at St. Lawrence University, a school located in New York’s Adirondack region. Despite being across the country from his family in San Diego, Slaker is excited about his future school.

“(St. Lawrence) was an overall good fit. They saw me playing a big role there, and they believe I can be a big time player,” said Slaker who also was quick to credit his current coaches with getting him to this point. “(Williams) is really turning my game into a pro and college style. I definitely needed help with that, doing the little things right. He’s been huge for my development and getting me ready for college hockey and then, hopefully, pro hockey one day.”

There’s no telling what could be in store for Slaker, but if history is any indication, he’ll come out stronger and more experienced, ready for the next journey that lies ahead.