Team USA forward Randy Hernandez has impressed scouts with his blazing speed, but he hopes to prove more in his game with USHL experience. 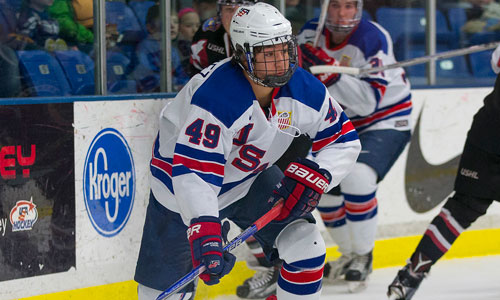 Randy Hernandez committed to play for Team USA two months before the 2015 NHL Draft. The Miami, FL native finished an incredible season with the Florida Alliance scoring 93 points in 54 games. Hernandez then watched as a record 37 players from the USHL were selected in the NHL Draft less than an hour from his home. It was an obvious choice to spend his next season in the USHL with Team USA.

“It’s great to get this opportunity and play with players at such a high level,” said Hernandez. “Playing in the USHL is a great opportunity.”

Unlike most of his friends and family, Hernandez gravitated towards hockey at young age. He first learned how to skate at a cousin’s birthday party. After his first introduction to the game, Hernandez attended as many public skates as he could where he first caught the eye of a coach who admired the winger’s blazing speed. With permission from his grandmother, Hernandez joined his first organized hockey team.

Hernandez credits his worth ethic for separating him from his peers.

“Playing at this level, when you’re playing against the best guys in the nation, it’s a great opportunity to battle,” said Hernandez. “It’s definitely a new level here.”

That new level is hopefully one of many. Hernandez has recently received many offers to play college hockey, something he hasn’t necessarily focused on during the season. Perhaps the reality of playing for Team USA and in the USHL hasn’t quite sunk in yet for the trailblazer. For now, Hernandez is thankful that he, the son of Cuban immigrants, fell in love with a game that has already given so much back.

“It’d be great to play at that level and just know you had the opportunity to make it that far in life,” said Hernandez. “I’d be happy for my family and it’d be great.”