Max Gildon one of many Texas products succeeding in USHL 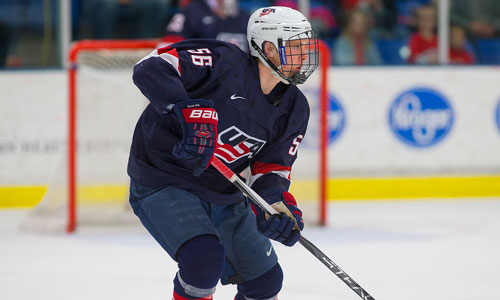 Team USA defenseman Max Gildon was one month and two days old when the Dallas Stars won the Stanley Cup. Much has been made about the growth of hockey in the state of Texas since the Stars first moved to the area, and how large of a boost that Championship meant for youth hockey in the city.

It’s natural for the Plano native to be grouped with other Texas players. Gildon, who played for the Dallas Stars Elite program with defenseman and Edmonton Oilers prospect Caleb Jones (Team USA), laughs about other Texas comparisons. He has been compared to Caleb and Seth Jones (Team USA) both.

“People can’t help it,” laughed Gildon. “There have been comparisons.”

Gildon didn’t necessarily grow up as a Dallas Stars fan. Like many players throughout the league, Gildon was more of a fan of watching hockey at a high level. Other teams and players he followed as a kid were the Washington Capitols, Duncan Keith and Victor Hedman, both of which have been heavy influences in his film studies.

Reaching the USHL is a testament to the development from midget, high school and bantam programs in a player’s career. Texas was once written about as a potential oasis isolated from the rest of the hockey world. That is no longer the case.

“Hockey isn’t as popular and some people don’t know hockey as well as other places,” said Gildon. “But it’s not really as different as some people may think.”

Gildon’s hockey upbringing has been similar to his other Team USA teammates from the likes of Minnesota, Michigan and the east coast. This season has proven his successful youth development as a two-way defenseman. From international appearances and USHL play, the uncommitted defenseman has amassed 23 points this season.

More than halfway through the season, Gildon believes the USHL and Team USA have provided him a great opportunity and looks forward to a big season next year.

“It’s a lot more like pro from what I know,” said Gildon. “It really helps us in our development. It’s an incredible opportunity to play for this team and playing against players of high caliber every day.”