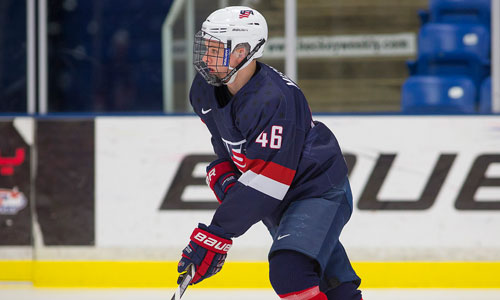 April 2015 might have been the busiest month of Grant Mismash’s young hockey career. One week after committing to the University of North Dakota, Mismash confirmed his offer to play in the USHL with Team USA. It was a well-earned week as Mismash put up over 150 points in 100 games with the Minnesota-based Shattuck St. Mary’s program.

Mismash credits his dad for instilling hockey into his blood at a young age. He grew up watching the Gophers and Minnesota Wild, hoping to one day play at a higher level. Taking the next step to the USHL was the logical choice to get there.

“Shattuck was a big jump just being in boarding school in ninth grade and moving away from home but I think this so far this has been a bigger jump,” said Mismash. “It’s coming to the rink for long hours, long work outs, hard skates and the boys pushing each other. It’s a lot of fun.”

That fun is why Mismash decided to first play hockey. Whether it was watching games with his dad or playing knee-hockey with his brother, no matter how violent the games may have turned in sibling rivalry, Mismash loved the game.

“My dad was at work so my mom would take me to free ice and would always teach me how to skate,” said Mismash. “She would skate backwards and I would chase after her. I’d never get her. I was pretty young and always crying. I hated it at first but once I got older and learned how to skate more it was pretty fun.”

Mismash is well aware of the projections and the early success he’s had with Team USA, but he points to other aspects of his game that he find more pride in than the goals and assists in boxscores. Most notable, Mismash believes he is a better hockey player today because of coach Don Granato.

“He knows what it takes,” said Mismash. “Coming into this I thought I knew a lot about hockey but coach has really taught us more about the game. That’s been my biggest improvement: learning more and more every day about the game.”

Those teachings have helped the entire roster up and down for Team USA. With the off-ice training, strength and conditioning programs, Mismash believes he and the rest of Team USA U17 is adapting well to USHL play.

“We’re starting to realize we can play with those guys and we continue to get bigger and stronger,” said Mismash. “You can feel it and see it on the ice how we play now. It was a big jump but we’re getting pretty comfortable now.”