Eero Teräväinen has enjoyed recent international success with team Finland after being selected by the Lincoln Stars in the 2015 USHL Draft. 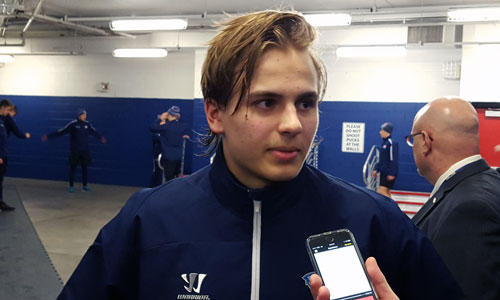 There are many clear distinctions between Eero and his brother other than their respective positions. Teuvo was known as a speedy playmaker with Jokerit prior to his NHL Draft year. Eero, slightly smaller in stature, is a smooth skating stay at home defenseman that thrives on positioning. It was one of the reasons the Lincoln Stars selected the defenseman in the 5th round, 65th overall in the 2015 USHL Phase I Draft.

“It was an amazing feeling,” said Teräväinen. “I was surprised.”

Teräväinen didn’t get word that he had been drafted until one day after the USHL Draft when a friend called him. A tweet from the USHL league account had captured the attention of close friends and families, as they all began to call him.

After the draft, Teräväinen traveled to the United States to report to Lincoln’s summer camp held in Minneapolis, MN.

“It was a nice place,” said Teräväinen. “I enjoyed playing with the other players. It was a nice time there and I played well there.”

While Teräväinen’s future in the USHL remains a possibility, playing for his country remains a high point in his career. The Helsinki, FIN native will look to a big season next year prior to the 2017 NHL Draft. Teräväinen is aware of the ups and downs that may come with next season should he come to North America, but for now he is relishing in the moment.

“This has all been exciting, it has been a huge honor,” said Teräväinen.