Scott Reedy placing himself at top of 2017 NHL Draft class

Team USA forward Scott Reedy continues to score at a point-per-game pace, something that only two other USHL 16-year old players have done. 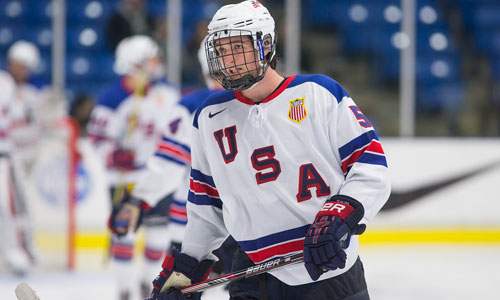 Any time a 16-year old produces at a point-per-game pace they are bound to grab attention from media and scouts alike. Scott Reedy has scored 22 points in 21 USHL games with less than 15 games remaining depending on which Team USA schedule he plays. Only two other USHL players have produced at a point-per-game pace or better as a 16-year old: Clayton Keller (Team USA) and Jeremy Bracco (Team USA). It’s good company for the 2017 NHL Draft eligible center.

The Prior Lake, MN native came to Team USA and the USHL after skating two seasons with Shattuck St. Mary’s scoring 180 points in 119 games. Reedy committed to play college hockey with the University of Minnesota in 2014, one of the greatest accomplishments in his young hockey career.

“It was by far the place I wanted to go to and I thought about getting good schooling there, good coaching, good rink to play in and obviously in my hometown so it’s where I want to be,” said Reedy. “It’s always been a dream to play there. I’ll have my family close by and lots of people I know. It’s going to be a huge part for me.”

Most centers struggle at a young age in the USHL. On top of playing against larger and older players, it is especially difficult for young centers to pick up on defensive responsibilities and match up against quicker forwards.

Reedy noted the high level of competition he is matched up against in the USHL, but thinks the talent surrounding him has been responsible for his success.

“We have a good team that is really good at moving the puck around and makes it easy to get the puck in the back of the net,” said Reedy. “When you get help from teammates like that it makes it a lot easier. It’s a jump going straight into the USHL but you have to battle through it and know you’re going to lose some games and know that this year is all about development.”

That development includes international tournaments in addition to the USHL schedule. Reedy scored four points in four games at the U17 Five Nations tournament after scoring nine points in five games at the U17 WHC. Reedy believes that the time he and his teammates are putting in this season will be beneficial next year.

Team USA U17, comprised entirely of players born in 1999, will all have a season of USHL experience. Reedy noted that will give an advantage over teams and players who might be in their first USHL season.

“That’ll be huge,” said Reedy. “Next year I want to win a world championship. Individually I’d just like to help out my team and be the best player I can be.”