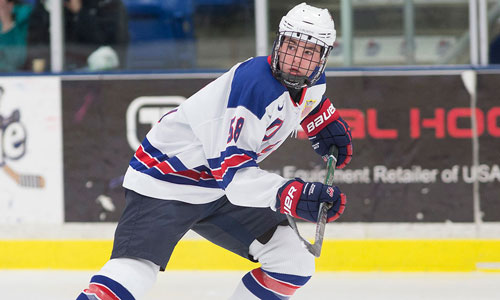 Proctor Academy defenseman Reilly Walsh had one of the most interesting weeks a 15-year old hockey player could have last season. Shortly after being selected in the USHL Phase I Draft by the Tri-City Storm in the 1st round, 14th overall Walsh announced his commitment to play college hockey at Harvard University.

“It was a shock, I didn’t expect to see myself get picked in the first round,” said Walsh. “I was talking to a couple of teams and was thinking 3-4th round, but going first round was definitely a big honor to be drafted by Tri-City. I was really happy and it was a big accomplishment.”

The Andover, NH finished second in team scoring with 45 points in 35 games for Proctor Academy. Walsh’s offensive production in prep school hockey will be tough to follow up in the USHL, but he has already had the advantage of gaining experience with Team USA to allow for an easier transition.

Joining the team for two international competitions, Walsh has scored seven points including three goals from the blue line.

“It’s an honor. This is the second time I’ve played internationally and I just get chills,” said Walsh of the U17 Five Nations Tournament held in Plymouth, MI. “No better feeling than to represent your country.”

Much can be said about Walsh’s offensive production but what may be most impressive is his commitment to improving his defensive game. Relied upon by his team at Five Nations, Walsh impressed scouts throughout the tournament with his recovery skills, position and high-end speed. Walsh would finish the tournament as one of two Team USA defensemen with a +1 rating or better.

As for his USHL future, Walsh recently spoke with Tri-City management about how his season was going and when he would potentially travel to Kearney, NE to join the team. Walsh noted that it was a positive conversation to have with coaches and hopes to stay in close contact.

Until then, Walsh has set goals for himself to keep getting ready for the rigorous play of the USHL.

“I want to keep working on my defensive position,” said Walsh. “Because I’m an undersized defenseman I try to rely on skill and smarts to go up against bigger guys even if they’re stronger. I’ve been focusing on my strength as I go because you have to be strong to play in this league playing with older guys.”