Cleveland Barons forward Curtis Hall looks forward to playing in the USHL next season in Ohio with the Youngstown Phantoms. 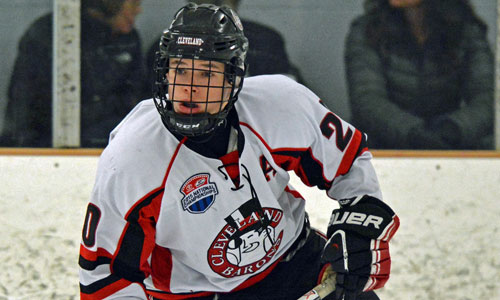 The Youngstown Phantoms, members of the United States Hockey League announced today they have signed forward Curtis Hall to a tender for the 2016-17 season. Hall is the second player to sign a tender with a USHL team this season. Eight players signed tender contracts last season.

Hall, a Chagrin Falls, OH native, currently plays for the Cleveland Barons (T1EHL) an hour northwest of the Youngstown Phantoms. He is currently uncommitted.

“I think it’s a great opportunity to be closer to home and to play in the top junior league in the country,” Hall said. “I really like the idea of keeping my NCAA eligibility and I feel like it’s a great fit for the way I play. I like the way the USHL functions and its style of play.”

“We envision Curtis becoming a top two line center for our organization,” said Youngstown Phantoms general manager Jason Koehler. “He has a great combination of size and skill, can skate well, and plays a 200-foot game. We see a young man with a ton of potential that will grow and improve over his junior hockey career with our coaching staff and strength coach, and we believe he has a very high ceiling. Our organization is excited to sign Curtis and eager to have him in Youngstown moving forward.”

The self-described two-way forward has 34 points in 32 games this season, including 10 goals. USHL scouts liked his size and physical play prior to Youngstown signing him to a tender. Hall likes to imitate his game after Columbus Blue Jackets forward Brandon Saad (Team USA), who also played for the Phantoms in the NAHL when they were known as the Mahoning Valley Phantoms.

Prior to play with the Cleveland Barons, Hall played for a Chicago-based select team in summer and spring tournaments. It was then that the forward first began to sculpt his game.

“I watched the Chicago Blackhawks then and have followed them since then,” said Hall. “I watched Toews and Saad growing up, all of those guys, Kane and Hossa. I idolized [former USHL player] Patrick Sharp.”

Hall was born in Princeton, NJ but has lived nearly the entirety of his life in Ohio. The announcement to play in the USHL next season in the state of Ohio is a point of pride for the young forward. Hall hopes to make the most of the rest of his T1EHL season in Cleveland before arriving in Youngstown later this summer.

“I really want to take my last couple of game to take in some of the kids I’ve played with my entire life,” said Hall. “My experience has been great so far. Stepping up to the U16 level was good playing with the guys and with my size. I felt better as the season went on with some of the adjustments that were needed. It was a great experience but I’m excited to go to bigger and better things.”