Michigan native Collin Adams continues to fit comfortably in Muskegon and now is tied for the rookie lead in scoring. 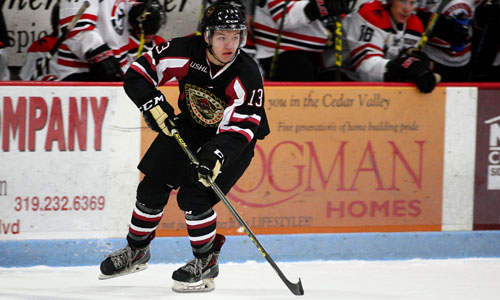 Muskegon Lumberjacks forward Collin Adams is anything but a rookie. The first-year forward has been an integral part to the highest scoring line in the USHL this season, and is now tied for the rookie lead in scoring. Novice by definition, Adams has excelled in all expectations both on the ice and in the locker room.

Adams is a native of Brighton, Michigan – a town located just 150 miles from Muskegon – and has thrived in his first season in the league while playing on a line with Rem Pitlick, the USHL’s leading scorer. The University of North Dakota commit has 23 goals and 31 assists in 54 games so far this season. Adams credits his linemates who have helped him thrive as a first-year player producing at a point-per-game pace.

Adams, a fourth round Phase I Draft pick of the Lumberjacks in 2014, was a member of the Little Caesars (HPHL) and Honeybaked (HPHL) youth programs before joining the USHL. He played three games with Muskegon last season and also spent time with Team USA and the Under-17 team. Muskegon Lumberjacks general manager/director of hockey operations John Vanbiesbrouck says he likes what he saw from Adams before he drafted him in 2014, and likes what he’s seen so far this season.

“I saw determination and intensity, a player who wanted the puck in every game and wanted to score,” said Vanbiesbrouck. “Collin is producing at a high level, playing with extreme confidence. Playing with Rem and Matej has certainly created special chemistry.”

At only 5’9”, 172 pounds, Adams is considered by many as an ‘undersized’ player, but he says there is one specific part of him game that really helps him thrive as an undersized player in a physical league like the USHL.

“He is in the pro process now,” added Vanbiesbrouck. “He is turning heads despite his size and all the hurdles a pro potential player has to overcome. He wants to be the best on and off the ice.​ Speed is a big asset when it comes to bigger guys trying to hit you. You have to be fast to get out of the way.”

And yet, despite being one of the leading scorers on his team in only his first year in the league, Adams says that’s not what he wants his legacy to be when he leaves the USHL as he graduates to college hockey and possibly a pro career. He has something other than hockey on his mind.

“I want to be remembered as not just a guy putting up a lot of points, but as a very humble, very honest guy,” said Adams. “Remembered as a guy that’s on the smaller side that had to battle his way to get what he deserves.”

Vanbiesbrouck, who has personally seen the growth and development of his player, added that Adams may well be on his way to cementing that legacy.

“Colin is a very considerate person. He really cares about his teammates, the community and overall impact on people.​”