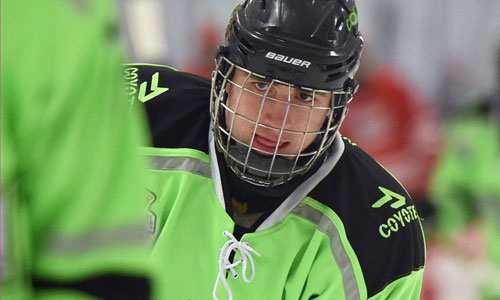 The Omaha Lancers, members of the United States Hockey League, announced today that they have signed forward Jack Randl from Chicago Mission (HPHL) to a tender for the 2016-17 season. Randl, a native of Carpentersville, IL, is Omaha’s second and final tender this season, and will take the place of the Lancers USHL Phase I Draft second round pick. Randl is the ninth player to sign a tender with a USHL team this season. Eight players signed tender contracts last season.

A tender contract allows USHL clubs to sign a player directly to their team for next season in exchange for their first or second round pick in the USHL Phase I Draft.

“Jack’s game should translate well at our level,” said Omaha Lancers head coach Brian Kaufman. “He’s a big, strong forward who skates well and has the ability to make plays with the puck. Every time our staff watched him he had a big impact on the game with and without the puck. His competitiveness and his desire to win are characteristics that we look for and want in our players. We feel very fortunate to have signed Jack to a tender and want to welcome him to our organization.”

Randl recently completed his third season with Chicago Mission, scoring 16 points in 28 games, including seven goals. Randl, a Carpentersville, Illinois native, helped the Chicago Mission win both the Illinois State Championship and the Regional Championship that took place at Ralston Arena in Omaha, Nebraska. The Mission followed that up with a trip to the National Tournament in San Jose, California.

Randl announced his commitment to play college hockey at the University of Michigan on November 2, 2015.

“The USHL is a great league and getting better every year,” Randl finished. “I look forward to developing here.”