Bloomington Thunder force a Game 5 after Brogan Rafferty scores the game-winner in overtime. 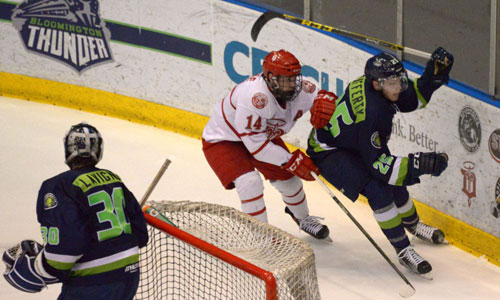 Brogan Rafferty netted the game-winner 8:45 into the first overtime to give the Bloomington Thunder a 3-2 win over the Dubuque Fighting Saints, and forced a decisive Game 5 back in Dubuque.

Jake Slaker got on the board first to give the Thunder a 1-0 lead, but Mitchell Smith answered about four minutes later to tie the game up heading into the first intermission. Slaker now has 12 points so far in the Clark Cup Playoffs, tied for most in the postseason with Dubuque's Keegan Ford. After a scoreless middle frame, the Saints took a 2-1 lead thanks to a Ford tally. Tarek Baker responded at 14:28 to even the game at 2 and send it into overtime, where Rafferty scored and gave the Thunder the victory.

Both teams had a power play goal in the game, and Hayden Lavigne was outstanding for Bloomington between the pipes, stopping 39 of 41 Fighting Saints shots. The series now shifts back to Dubuque for the final Game 5 on Tuesday night, where the winner will advance to the Clark Cup Final.