The Dubuque Fighting Saints and Tri-City Storm are set to square off to determine 2016 Clark Cup Champion. 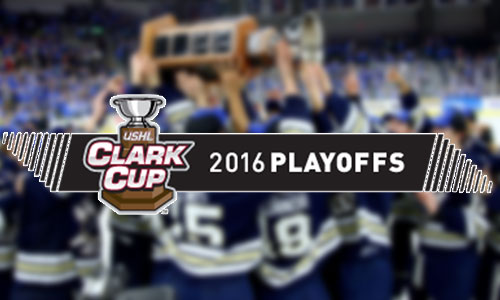 Both Conference Finals series went to a decisive Game 5 for the first time since 2013. With all four Eastern Conference teams holding better regular season records than any Western Conference team, Clark Cup Final home ice was on the line for Dubuque as the Fighting Saints won 3-0 over the Bloomington Thunder. Dubuque is looking to win its third Clark Cup Championship in six years. Tri-City defeated the Waterloo Black Hawks on home ice in Game 5 tonight 5-3, and is now looking to win the team’s first-ever Clark Cup Championship.

All games will be broadcast on ushl.fasthockey.com in HD. All times listed below are CST.