The USHL's top rookies are recognized for their superior performances this season. 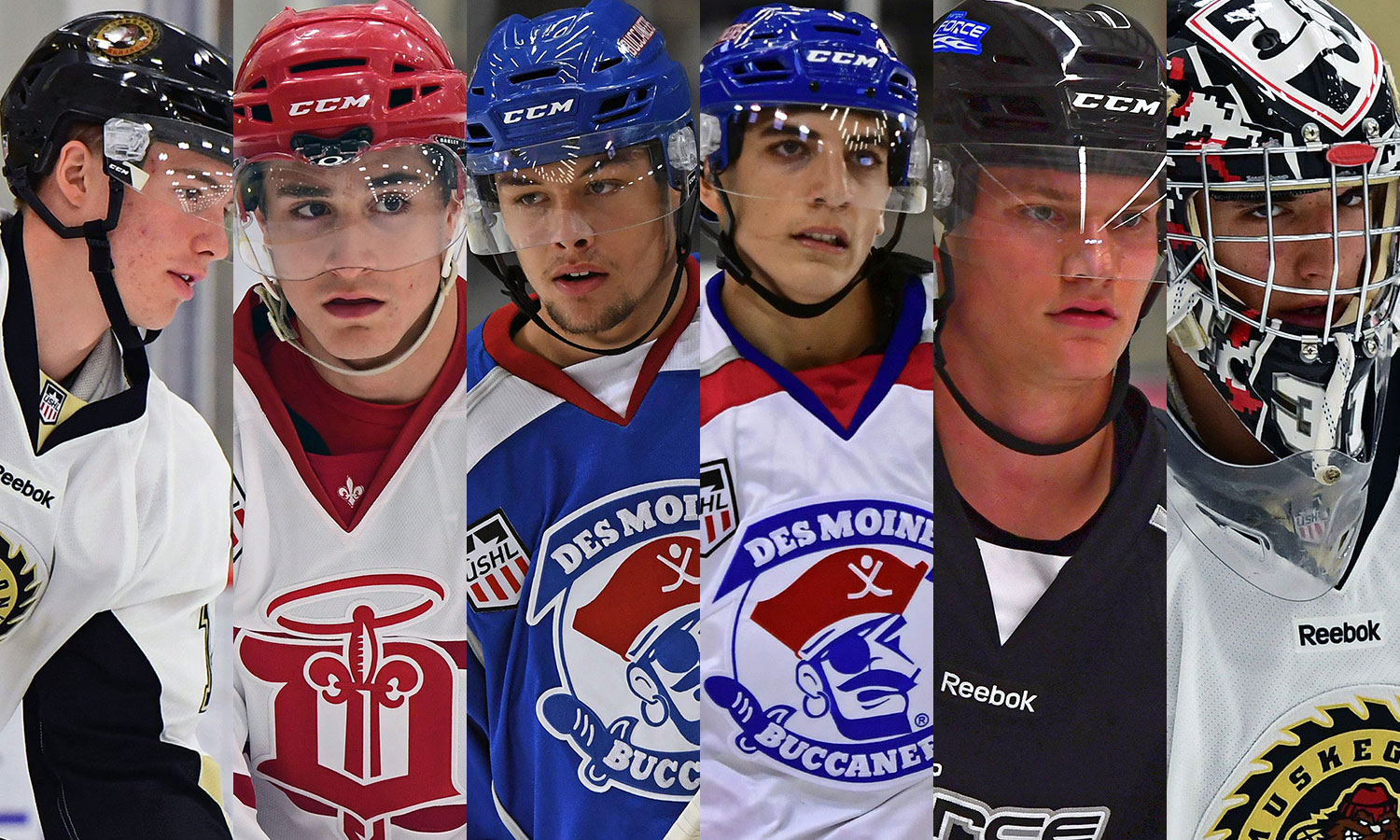 The United States Hockey League today announced the players named to the 2016-17 USHL All-Rookie Teams as determined by a vote of League general managers. The Madison Capitols abstained from nominations and final voting this season. The USHL All-Rookie Teams recognize the top players who were born after September 15, 1998, with less than 10 games of USHL experience in any prior season.

Svechnikov played in 48 games with Muskegon this season, scoring an impressive 29 goals and 58 points in that span, both of which led the team. The 2000-birth year rookie finished sixth in USHL scoring. The Barnal, Russia native led all rookies with 29 goals and 58 points, and ranked second with 29 assists. His 13-game point streak was the third longest recorded in the USHL this year. In addition to USHL play, Svechnikov also competed for Team Russia internationally including a World Junior A Challenge performance that earned him tournament MVP honors, in addition to a tournament all-star nomination. He is the first player to win USHL Rookie of the Year while starting the season as a 16-year-old since Kieffer Bellows (Sioux Falls Stampede) in 2015.

Guttman tallied 54 points (27G, 27A) in 53 regular season games, finishing second among rookies and tied for eighth among all USHL players in points. His 27 goals ranked second among rookies and seventh among all players, while his 27 assists were third among rookies and good enough to sit in the top-20 among all USHL players. The Los Angeles, CA native also recorded a pair of hat tricks over the course of the season – Jan. 13 against Cedar Rapids and March 26 against Sioux City. He also had point streaks of 12 games, six games, five games and four games. Guttman is committed to play college hockey at St. Cloud State University

Johnson was a key part of Des Moines’ roster all season long as he helped the Buccaneers earn a spot in the Clark Cup Playoffs for the first time in nine seasons. In 47 games in 2016-17, Johnson finished with 28 points (14G, 14A) in 47 games, ranking fifth among all USHL rookies. His 14 goals were good for fourth among all rookies, while his 14th assists tied for 10th among rookies. The Andover, MN native recorded a pair of multi-goal games, including a hat trick in Feb. 17’s 5-1 win over the Tri-City Storm. Johnson was named to the U.S. Junior Select Team for the World Junior A Challenge, where he helped Team USA to a gold medal. He was named to the USHL/NHL Top Prospects Game and was ranked 97th among North American skaters in NHL Central Scouting’s Final Rankings.

Ferraro finished second behind only Connor Mackey in scoring among defensemen, with 41 points (8G, 33A). He also played in all 60 of the Buccaneers regular season games and was also second among USHL blueliners with 33 assists. Among rookies, the University of Massachusetts commit lead the way with 33 helpers and was third in total points. He was also named to the USHL/NHL Top Prospects Game where he was credited with an assist to help Team West to a 4-0 victory. Ferraro was named USHL Defenseman of the Week on Nov. 21 and March 13 and was ranked 78th among North American skaters on NHL Central Scouting’s Final Rankings ahead of the 2017 NHL Draft.

Phillips scored 20 points (7G, 13A) in 56 games to finish among the top-15 USHL rookies in scoring. His 20 points ranked fourth among all USHL rookie defensemen, while he seven goals ranked second among rookie defensemen and fifth among all USHL blueliners. Phillips was named to USA Hockey’s Ivan Hlinka Team, the USA Hockey/CCM All-American Prospects Game, the U.S. Junior Select Team, where he helped Team USA to a gold medal at the World Junior A Challenge, and the USHL/NHL Top Prospects Game. The Edina, MN native is committed to the University of Minnesota.

Petruzzelli was solid between the pipes for Muskegon in his first USHL season, finishing with a record of 22-10-0-1, a 2.40 GAA and a .918 SV%. His wins and SV% ranked seventh among all USHL netminders, while he finished first among rookie goaltenders in wins and SV% and second in GAA. The Quinnipiac commit was named to USA Hockey’s Ivan Hlinka Team, the USA Hockey/CCM All-American Prospects Game, the U.S. Junior Select Team, where he helped Team USA to a gold medal at the World Junior A Challenge, and the USHL/NHL Top Prospects Game. At the Top Prospects Game, Petruzzelli, a native of Wilbraham, MA, recorded 21 saves in 27:15 of play en route to being named Team East MVP. He was named USHL Co-Goaltender of the Week on Jan. 23 and was ranked second among North American goaltenders on NHL Central Scouting’s Final Rankings. 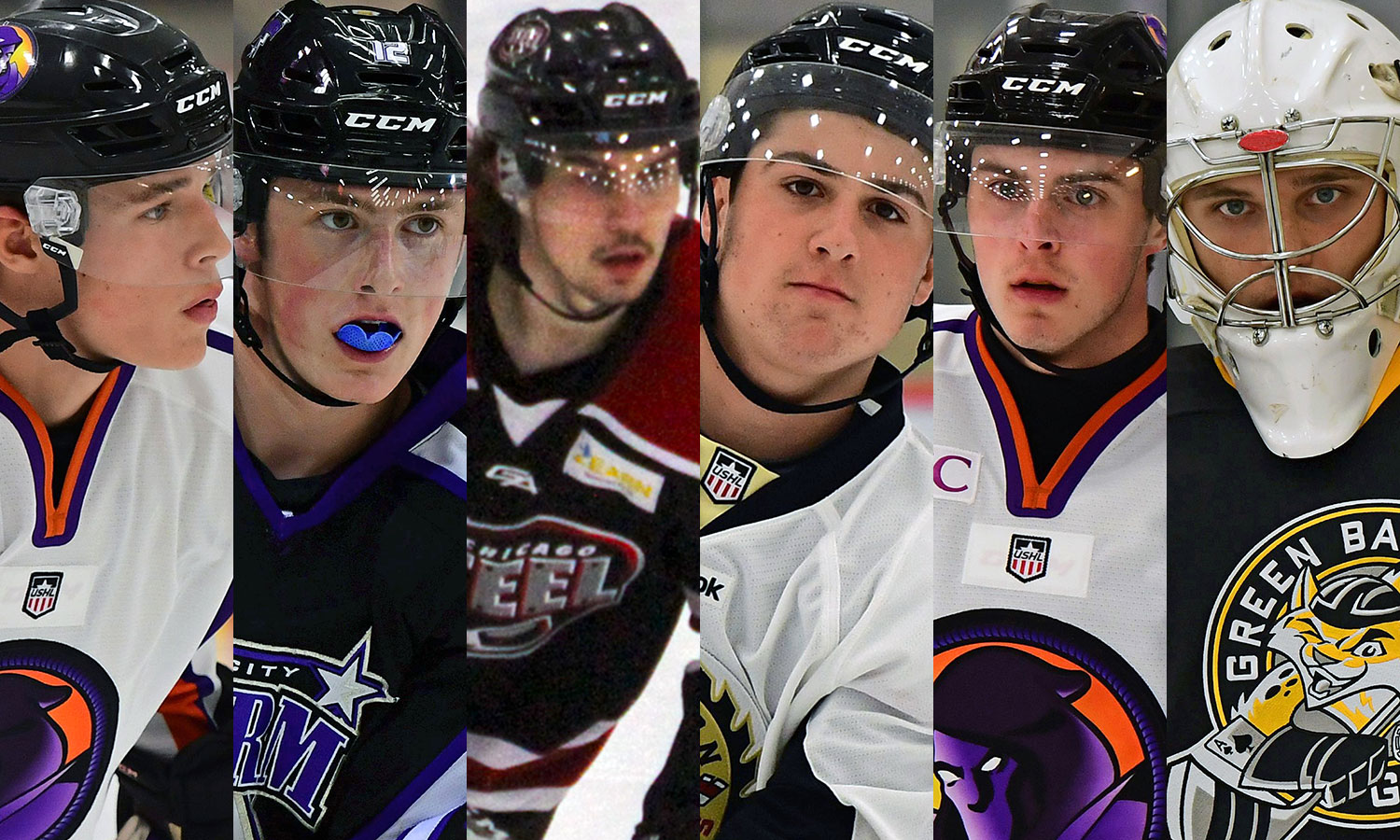 Hall posted 21 points (7G, 14A) in 59 regular season games. He opened his USHL career with an assist on Sep. 24 in Youngstown’s season opener against Team USA and dished out two helpers against Cedar Rapids on Dec. 10 and Chicago on Feb. 3. The 16-year-old Hall posted a five-game point streak from Dec. 9 to Dec. 27, with seven points (3G, 4A) in those contests. The Chagrin Falls, Ohio native is committed to Yale University and previously played for the Cleveland Barons youth organization.

Goodsir was one of the top players on the Tri-City lineup all season long, finishing fifth on the Storm and seventh among rookies with 26 points (16G, 10A) in 59 games. He recorded six multi-point performances over the course of the season, including a three-point performance (1G, 2A) in the second-to-last regular season game of the season, a 4-1 victory over the Cedar Rapids RoughRiders on April 7. The Okemos, WI was named to the USHL/NHL Top Prospects Game on Jan. 10 and is committed to play college hockey at the University of Denver.

Gratton finished the regular season just outside the top-10 in rookie scoring, with 22 points (10G, 22A) in 50 games to help Chicago reach the Clark Cup Playoffs for the first time since the 2007-08 season. He recorded a pair of three-point performances over the course of the season, the first coming on Dec. 28 against Dubuque and the other on Feb. 25 against Green Bay. Gratton had two goals and an assist against the Fighting Saints and three helpers against the Gamblers. He also scored two goals on March 10 against Team USA. Gratton is a native of Pottstown, PA and is committed to Penn State University.

Del Gaizo was only the second defenseman to finish among the top-10 in rookie scoring, with 23 points (3G, 20A) in 58 games. Those 20 assists ranked second among rookie defensemen and fourth among all rookies. His assists along with his +5 rating were good enough to crack the top-15 among all USHL defensemen. Del Gaizo had a season-high three assists on Feb. 10 against the Des Moines Buccaneers and dished out two helpers in a game three times over the course of the season. The Basking Ridge, NJ native was named USHL Defenseman of the Week on Jan. 16 and is committed to the University of Massachusetts.

Karow tallied 21 points (4G, 17A) over the course of 58 games, good for third among all USHL rookie defensemen. He recorded a pair of three-game point streaks during the regular season, the first coming from Feb. 4 to Feb. 10, where Karow dished out six assists in that span, including a pair of multi-assist games. The other three-game point streak of the Green Bay, WI native’s season started on March 18 and ran through March 25. Karow had a goal in each of those three contests. He was named USHL Defenseman of the Week on December 13 and was named to the USHL/NHL Top Prospects Game. Karow is committed to play his college hockey at Boston College.

Zhukov finished the regular season with a 19-8-1-1 record, a 2.25 GAA and a .913 SV%. His GAA ranked first among rookie goaltenders, while his wins ranked second and his SV% ranked third. He posted a three-game winning streak from Oct. 22 to November 4 and finished his regular season appearances with six straight victories from March 4 to March 31. He made 25 or more saves 10 times over the course of the season. The Russian netminder was named to the USHL/NHL Top Prospects Game earlier this season, where he was credited with 11 saves. He was also ranked nine among North American Goaltenders in NHL Central Scouting’s Final Rankings. Zhukov previously won Goaltender of the Week honors on Jan. 30 and March 20.