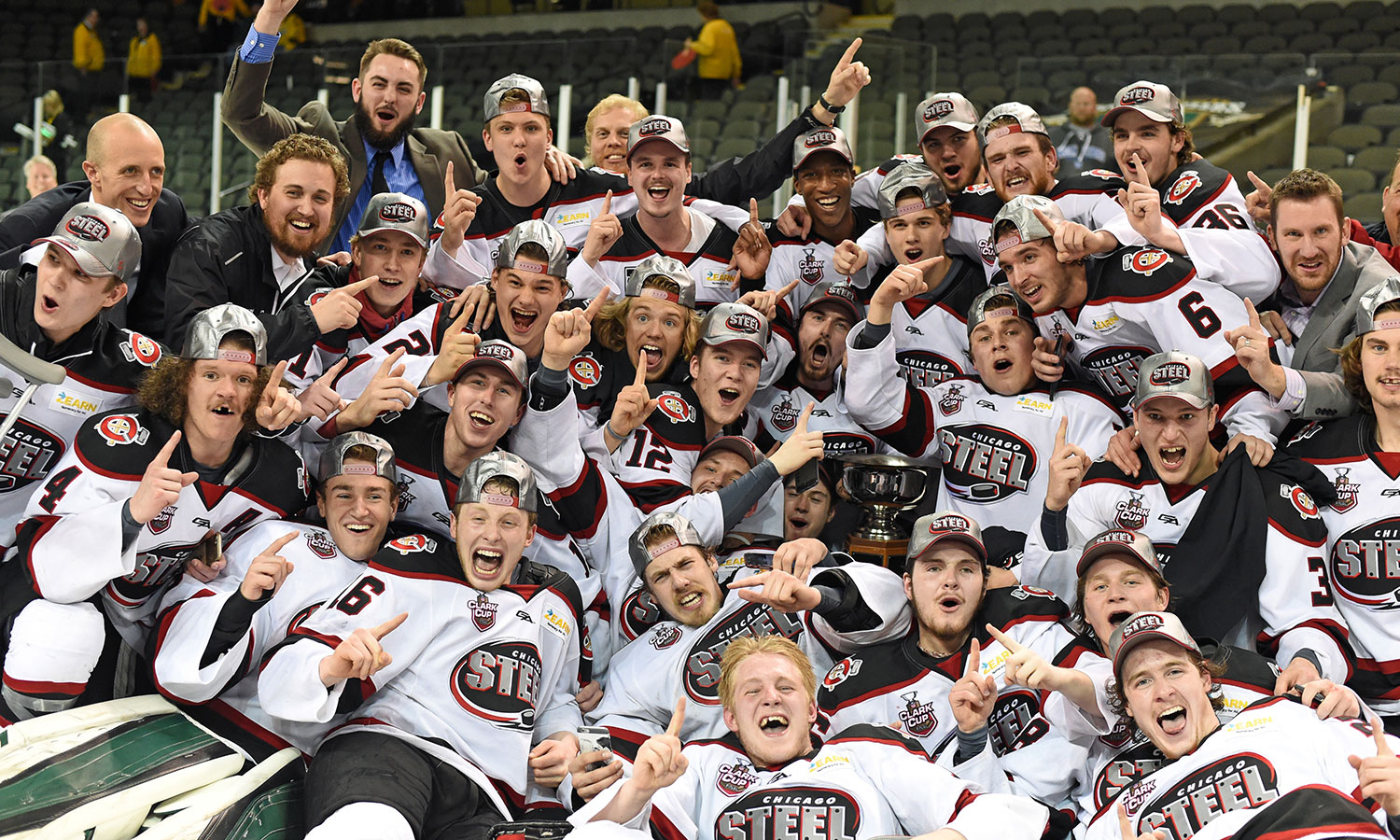 Tyler Gratton scored the Clark Cup-winning goal 11:30 into overtime to give the Chicago Steel a 2-1 victory over the Sioux City Musketeers in Game 5 of the 2017 Clark Cup Final in front of a sellout crowd at Tyson Events Center, giving the Steel their first Tier 1 National Championship in team history.

Eduards Tralmaks earned 2017 Clark Cup MVP honors thanks to a postseason in which he tallied 12 points (10G, 2A) in 14 games. The Riga, Latvia native's 10 goals are tied for the most in USHL Tier 1 Clark Cup Playoff history. Tralmaks' game-worn jersey, stick, helmet and gloves will be shipped to the Hockey Hall of Fame located in Toronto, ONT.

Sioux City opened the scoring 11:04 into the first period, as a Carson Vance shot ricochetted off a Steel defender high into the air before bouncing off the post and into the back of the net to give the Musketeers a 1-0 lead. Sioux City outshot Chicago 18-3 in the opening period and took that 1-0 advantage into the intermission.

The second period featured high-paced, back-and-forth action, as both teams traded scoring chances. Chicago was able to break through late in the period, as Tralmaks scored his 10th goal of the Clark Cup Playoffs at 15:27 of the middle frame to even the score at one goal apiece heading into the third period.

The final 20 minutes of regulation featured much of the same, with the Musketeers outshooting the Steel 10-9 in the period, but neither team was able to find the back of the net in the final frame, so Chicago and Sioux City headed to overtime to decide the 2017 Clark Cup. 11:30 into the extra session, Gratton fired the puck past Musketeers goaltender Matiss Kivlenieks to give the Steel a 2-1 victory in the game and the team's first ever Tier 1 National Championship.

Jack Badini added his 10th assist and 17th point of the postseason in the win, giving him the sixth most playoffs points in USHL Tier 1 history. Ales Stezka stopped 45 of the 46 shots he faced for his ninth victory of the Clark Cup Playoffs. The Minnesota Wild prospect finished the postseason with a 2.04 GAA, .936 SV% and three shutouts, and only allowed more than one goal just once in the series.

This series marked the first time since 2014 that a Clark Cup Final went to a decisive Game 5. The Indiana Ice knocked off the Waterloo Black Hawks at Young Arena in Game 5 of the 2014 Clark Cup Final. It was also the first Clark Cup Final to be decided in overtime since 2013 when the Dubuque Fighting Saints defeated the Fargo Force. Chicago's Clark Cup USA Hockey Tier 1 National Championship is the first in team history.