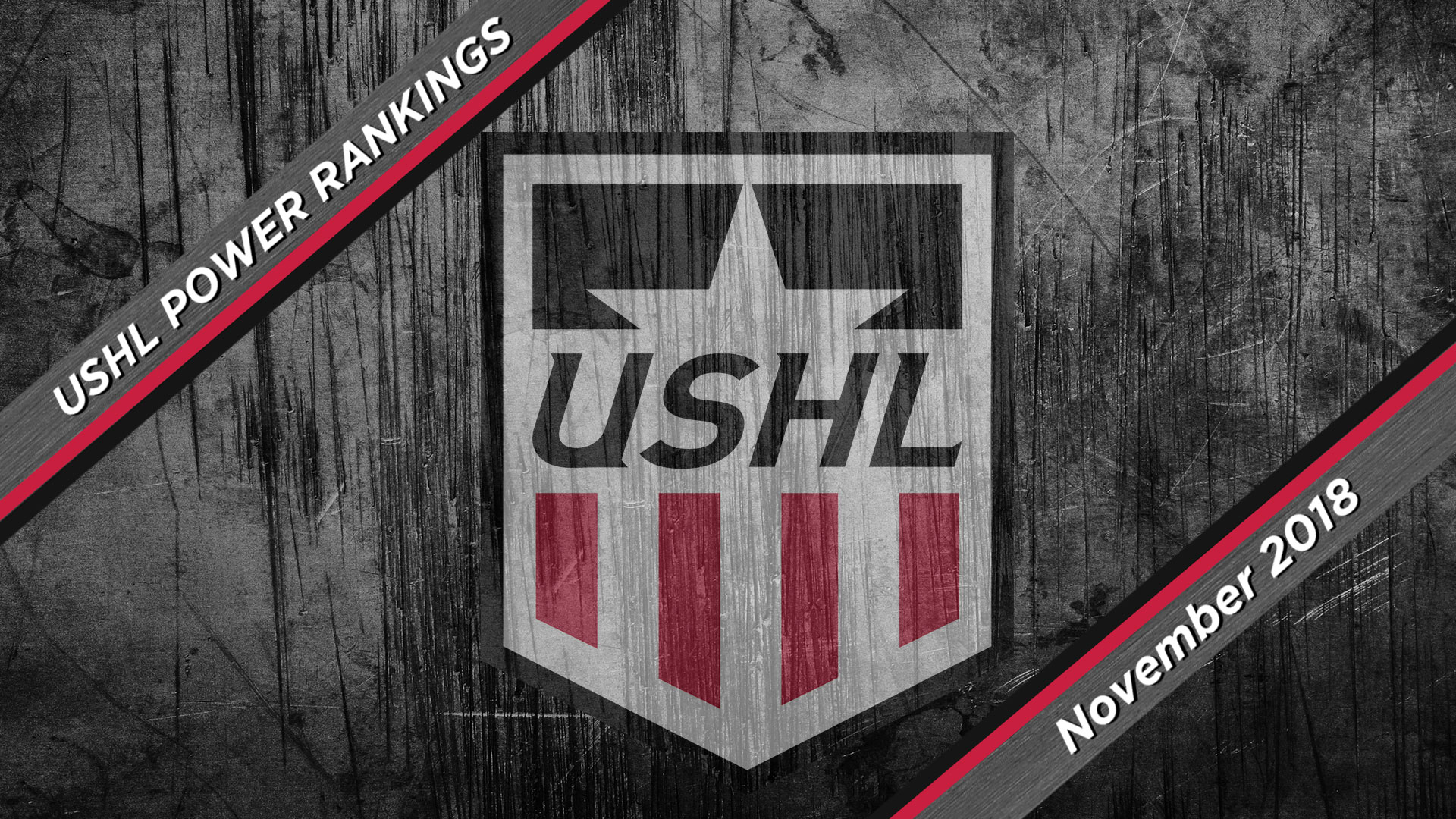 The 2018-19 USHL season is one month down, and the storylines are plentiful heading into November. The league has more NHL Draft hopefuls than ever, NHL prospects are at the top of the USHL scoring list, and several teams have gotten off to terrific starts.

The usahockeymagazine.com November Power Rankings takes a look at the USHL through one full month of the season. Media members from around the USHL rank the teams 1st to 17th, and the votes are compiled into overall rankings. Power Rankings are determined on a monthly basis and run through the end of the regular season. Listed below are the teams, their record and number of first place votes in parenthesis. 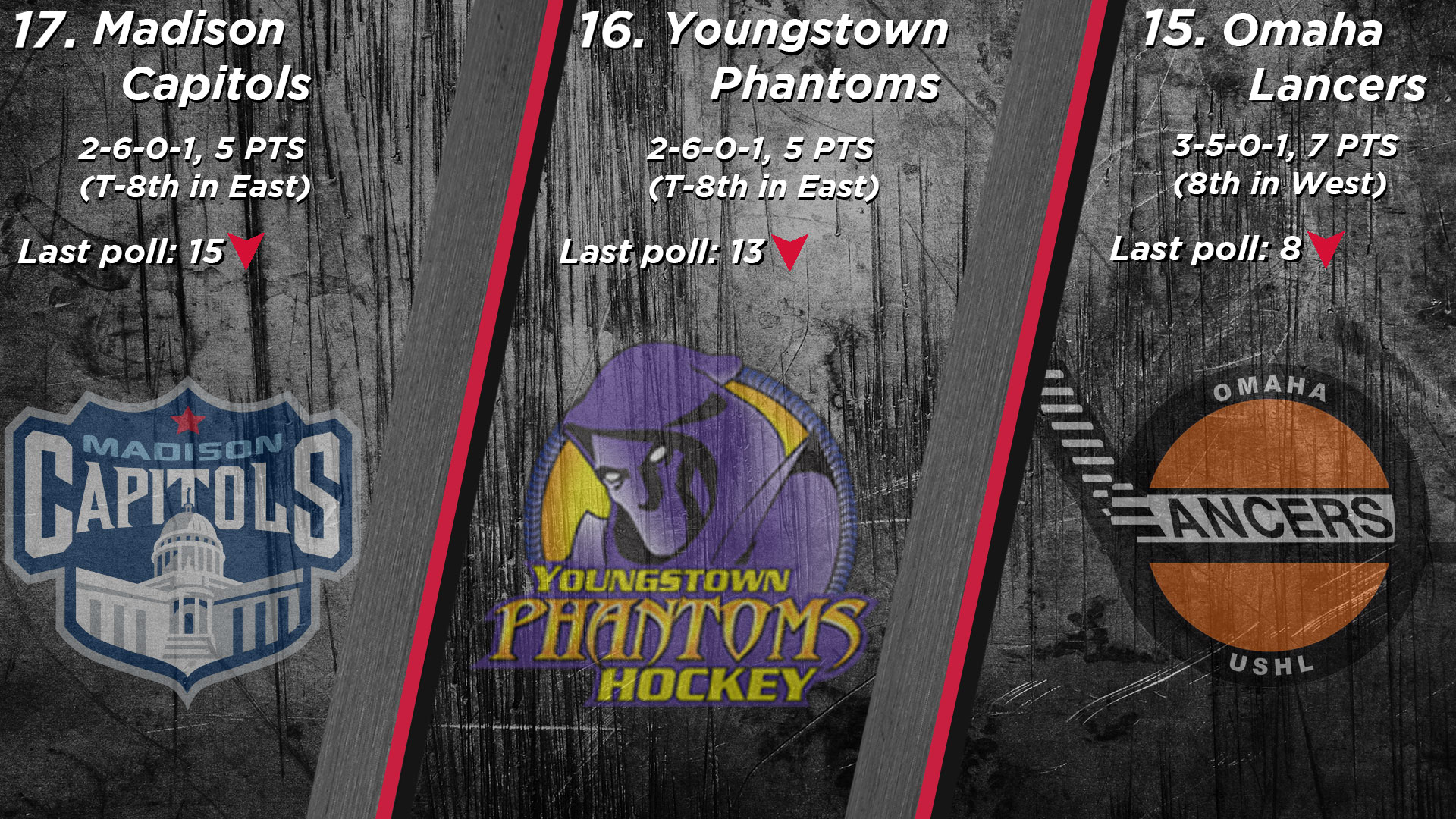 While the Capitols offense has struggled to click through the first nine games of the season, a bright spot for Madison has been goaltender Joey Lamoreaux. The Wisconsin native has played extremely well for his home state team this season. He currently sports a 2.59 GAA (T-4th in USHL) and .925 SV% (3rd in USHL). If the offense can pick up the scoring pace just a bit, the Capitols have a chance to make some noise moving forward.

It was a rough start for Youngstown, but the Phantoms have shown signs of turning it around as of late. The team one two of their final three games in October, thanks in part to the play of Connor MacEachern. The Robert Morris commit has points in four of his last five games heading into November, including six points (4G, 2A) in that stretch. He currently leads the team in scoring with eight points (5G, 3A) in nine games.

Although the Lancers have incurred some early season hiccups, there's reason for optimism in Omaha. The play of Logan Will is certainly a reason, as the Colorado College commit has points in seven of his first nine games of the season. The Lancers are also busy in November with 11 games on the schedule, a perfect opportunity to make up some ground in the Western Conference standings. 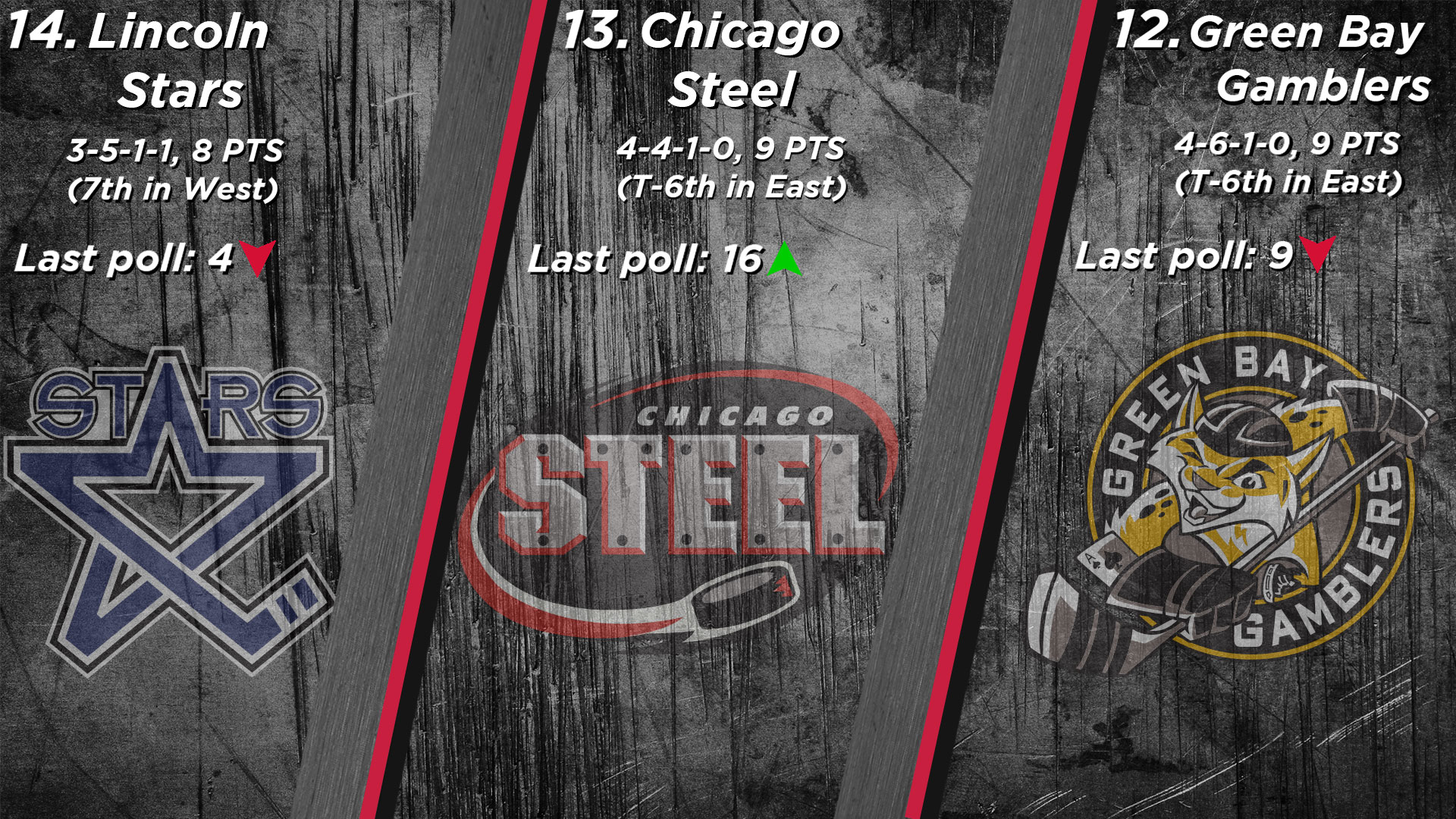 Shane Pinto has been fantastic for the Stars through the first 10 games of their season. The North Dakota commit has already registered 11 points (7G, 4A) in those 10 games, tying him for fourth among all USHL rookies in scoring. He also leads the Stars in scoring and is the only player on the team in double digits in points. Pinto was also listed on the NHL Central Scouting Preliminary List early in October. He will look to get the Stars going in November and get them team back above the .500 mark.

The Steel are right in the thick of things in the Eastern Conference and appear to be trending in the right direction. Chicago enters November having won back-to-back games against Eastern Conference opponents in Cedar Rapids and Green Bay. They have been led by top 2019 NHL Draft prospect Robert Mastrosimone. The Boston University commit leads the team in scoring with 10 points (6G, 4A) in the team's first nine games, including an overtime game-winner in his team's last game, a 4-3 win over Cedar Rapids on Oct. 27. He is also riding a three-game point streak as the calendar turns to November.

Green Bay logged some solid victories against good opponents in October, as the Gamblers picked up wins over Central Illinois, Waterloo and Dubuque. Goaltender Evan Fear has been one of the better netminders in the USHL through the first five weeks of the season. The Quinnipiac commit currently sports a 2.97 GAA and .914 SV%. His 2.97 GAA has him 10th in the league, and his .914 SV% places him fifth among all USHL goaltenders. 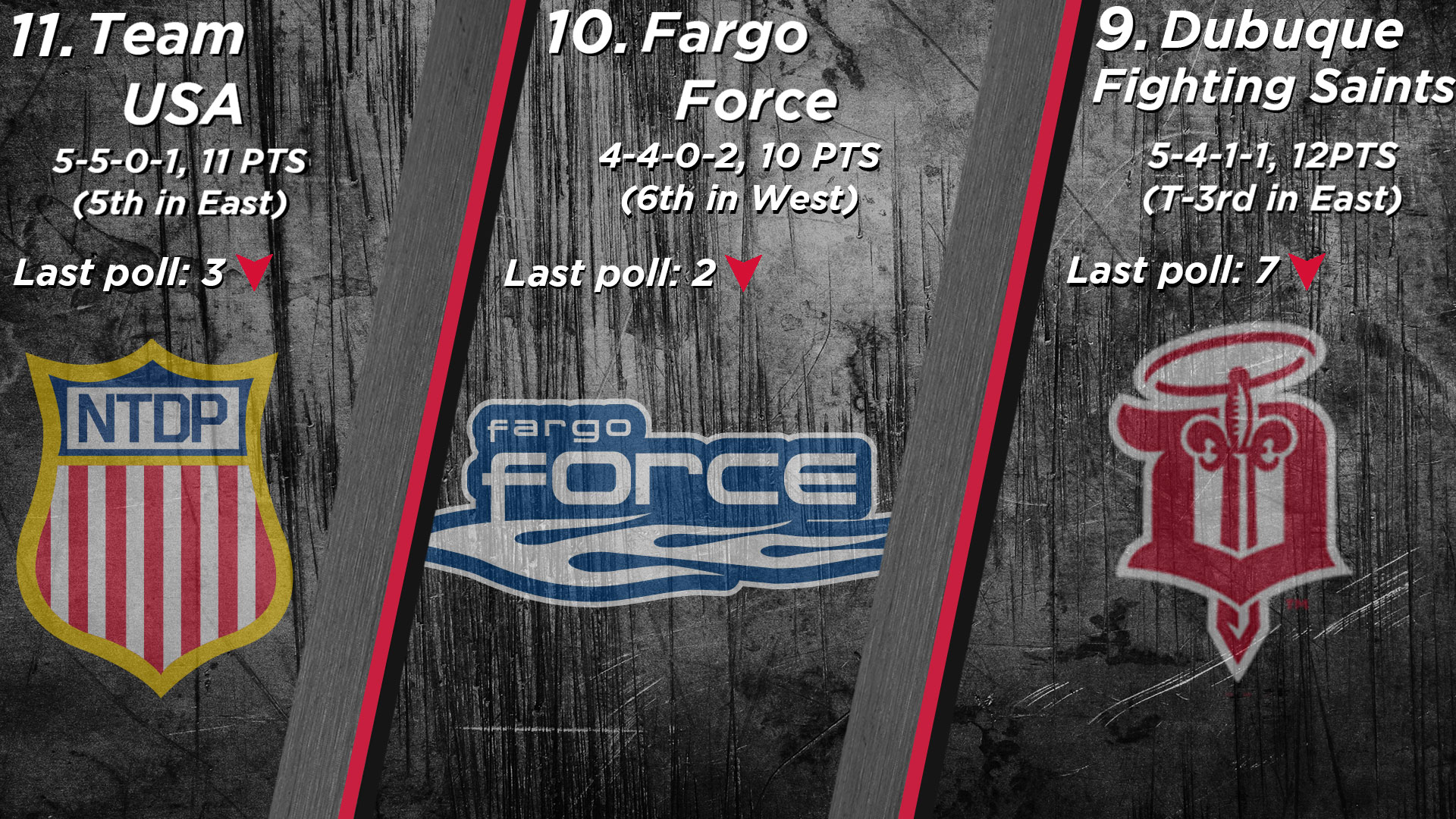 It has quite literally been a tale of two teams with Team USA. The U17 team is young and still learning how to play in the USHL, while the U18 team is living up to the lofty expectations that were set for them early in the season. The U18s picked up back-to-back 8-3 victories last weekend before falling 6-4 to the Muskegon Lumberjacks on Thursday morning. As expected, top 2019 NHL Draft prospect Jack Hughes leads the team with nine points (2G, 7A) in just five games. Matthew Beniers leads all the U17 players in scoring with five points. The U17s and U18s will only play four USHL games each in November due to international competition.

The defending Clark Cup champions are unbeaten in regulation in each of their last three games heading into November. A pair of veterans have been the offensive stalwarts for Fargo through the first full month of the season. University of Minnesota commit Ben Meyers and Hank Crone have tallied 15 points each to start the year, tying them for fourth place among all USHL players in scoring. Meyers is currently sporting a five-game goal scoring streak with seven points in his last five games. Crone is currently in the midst of a four-game point streak and has earned multiple points in each of those four contests.

The Jackson twins have been thrilling Dubuque Fighting Saints fans with their offensive production. Dylan Jackson and Ty Jackson have tallied 12 points each in their first 11 games. Dylan and Ty currently sit in a tie for second in rookie scoring and tied for ninth in USHL scoring. Also sitting among the USHL's top-10 point leaders in Riese Gaber, who is tied for seventh in the league with 13 points (3G 10A). This trio of dynamic offensive players has helped Dubuque score 40 goals in their 11 games, placing them in a tie for third in the Eastern Conference in terms of goals scored. 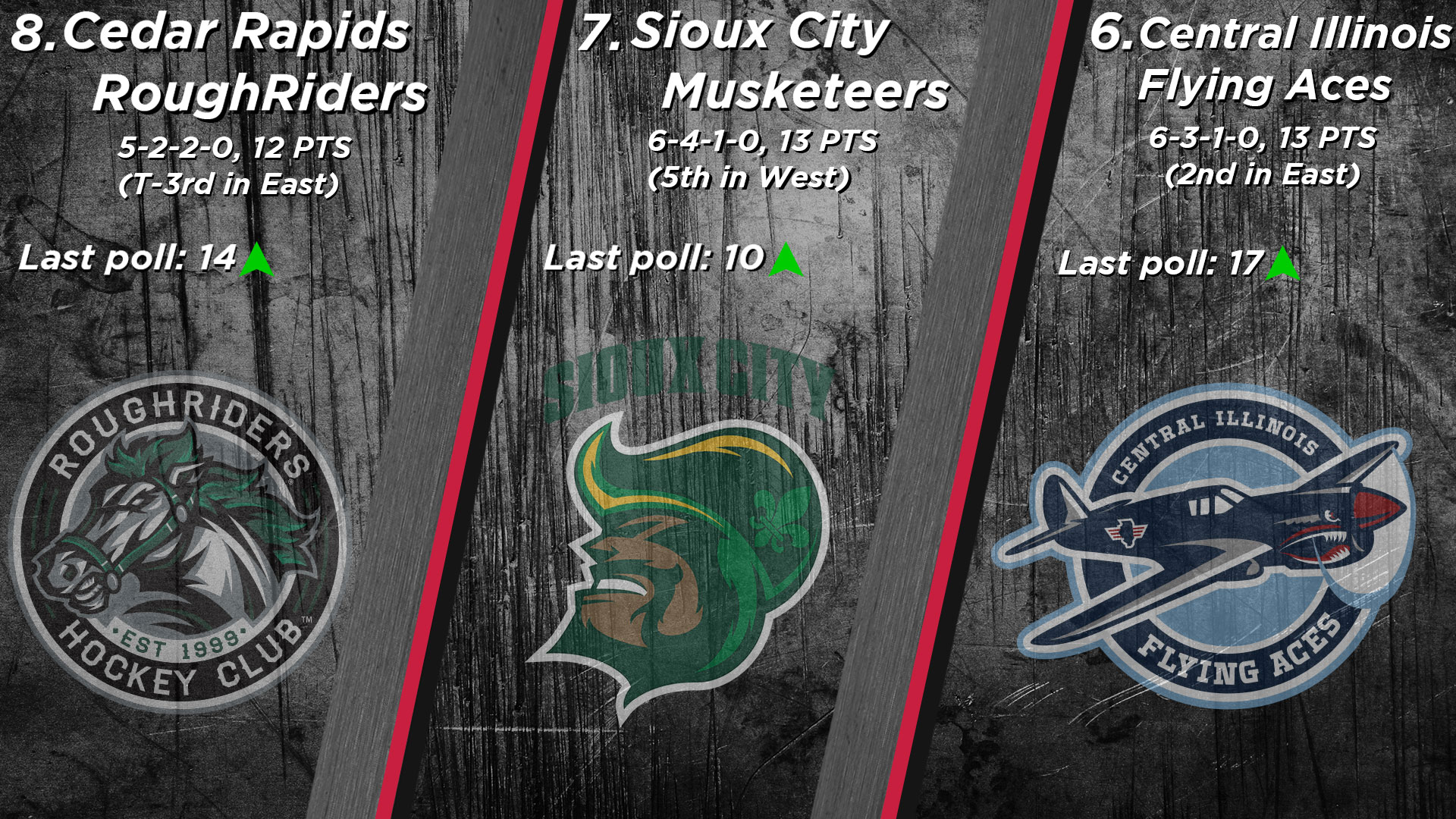 Cedar Rapids enters November with their best start in three years. The RoughRiders have won two of their last three games, while earning a point in an overtime loss in that third contest. It is a balanced offensive attack for Mark Carlson's club, as they do not feature a player who is in double digits in scoring. They have been winning games with defense and goaltending. Cedar Rapids has only allowed 24 goals, the second-fewest in the USHL. A big reason for that has been goaltender Blake Pietila. The Michigan Tech commit has been outstanding between the pipes, posting a 5-1-2-0 record, a 2.24 GAA and .926 SV%, second in USHL in both categories.

The big story for the Musketeers through their first 11 games has been the play of Martin Pospisil, Bobby Brink, Marcus Kallionkieli and Luke Johnson. Pospisil, the Calgary Flames prospect, leads the USHL in scoring with 21 points (6G, 15A). He has also started the season with an 11-game point streak and has multiple points in eight of those contests. Brink finds himself tied for second in USHL scoring with 17 points (5G, 12A). He opened the season with a seven-game point streak and has recorded at least two points in seven games, including his last two contests. Kallionkieli has scored a goal in each of his last six games and seven of his first eight contests, including a pair of two-goal performances. Johnson leads all USHL defenseman in scoring with 12 points (2G, 10A) and is the only defenseman in the league among the top-10 in points. The offense, combined with the goaltending potential of Ben Kraws, has Musketeers fans thinking big.

The play of the Flying Aces has been one of the biggest surprises early in this USHL season. Central Illinois ended October with four wins in their last five games. Veteran forward Trevor Janicke has the Aces flying high offensively, with 12 points (5G, 7A) in 10 games, but it's not just offense that has propelled Central Illinois. Veteran goaltender Ryan Snowden has been strong between the pipes, sporting a 2.91 GAA and .905 SV%, placing him eighth among USHL goaltenders in both categories. 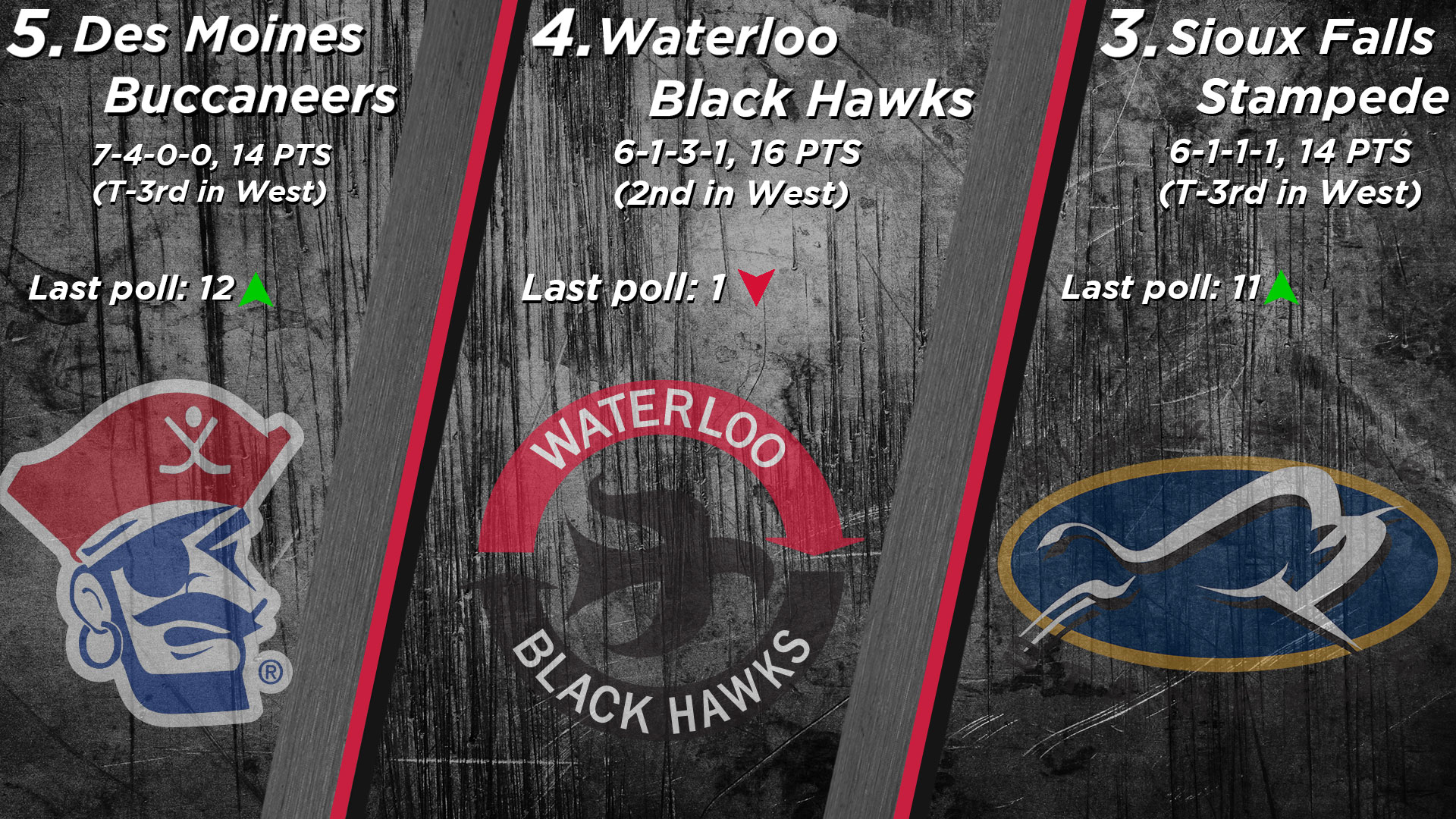 Des Moines enters November as one of the hotter teams in the USHL, with four wins in their last six games. The offense has been a huge reason for Des Moines' success, as they are currently third in Western Conference with 40 goals scored. A lot of the credit goes to Matt Brown, who is in the midst of a breakout season. The UMass-Lowell commit has been dominant, as he is tied for second in the USHL in scoring with 17 points. He has earned at least one point in eight of his first 11 games and ended October with a three-point performance against the Omaha Lancers, including a pair of highlight-reel goals. Anaheim Ducks prospect Roman Durny has been solid between the pipes, as he sits sixth in the league in both GAA (2.72) and SV% (.911).

Waterloo is one of the hottest teams in the USHL, having won six of their last seven games. They are also unbeaten in regulation in those seven contests. Matej Blumel and Vladislav Firstov have been dynamic offensive performers for the Black Hawks. Blumel currently sits sixth in USHL scoring with 14 points (10G, 4A) and is just one of two players who have reached the double-digit mark in goals. He is coming off a three-point performance, including the overtime winner, on Tuesday in Waterloo's 6-5 comeback victory over Sioux City. Firstov leads all rookies in scoring with 13 points (4G, 9A), is tied for seventh in USHL scoring and is coming off a two-point (1G, 1A) performance against the Musketeers. Rookie goaltender Logan Stein is playing well, as he sports a 2.96 GAA (9th in USHL) to go along with a 3-0-1-0 record.

The Stampede are 5-0-1-0 in their last six games and had won their previous five contests before an overtime loss to the Sioux City Musketeers on Oct. 27. Sioux Falls is playing well both offensively and defensively, giving up the second-fewest goals in the Western Conference (32) while scoring the fourth-most goals (34). It is a balanced offensive attack for the Herd, as no player is currently in double digits in scoring. Leading the way is second-year forward Artem Ivanyuzhenkov (9 PTS). 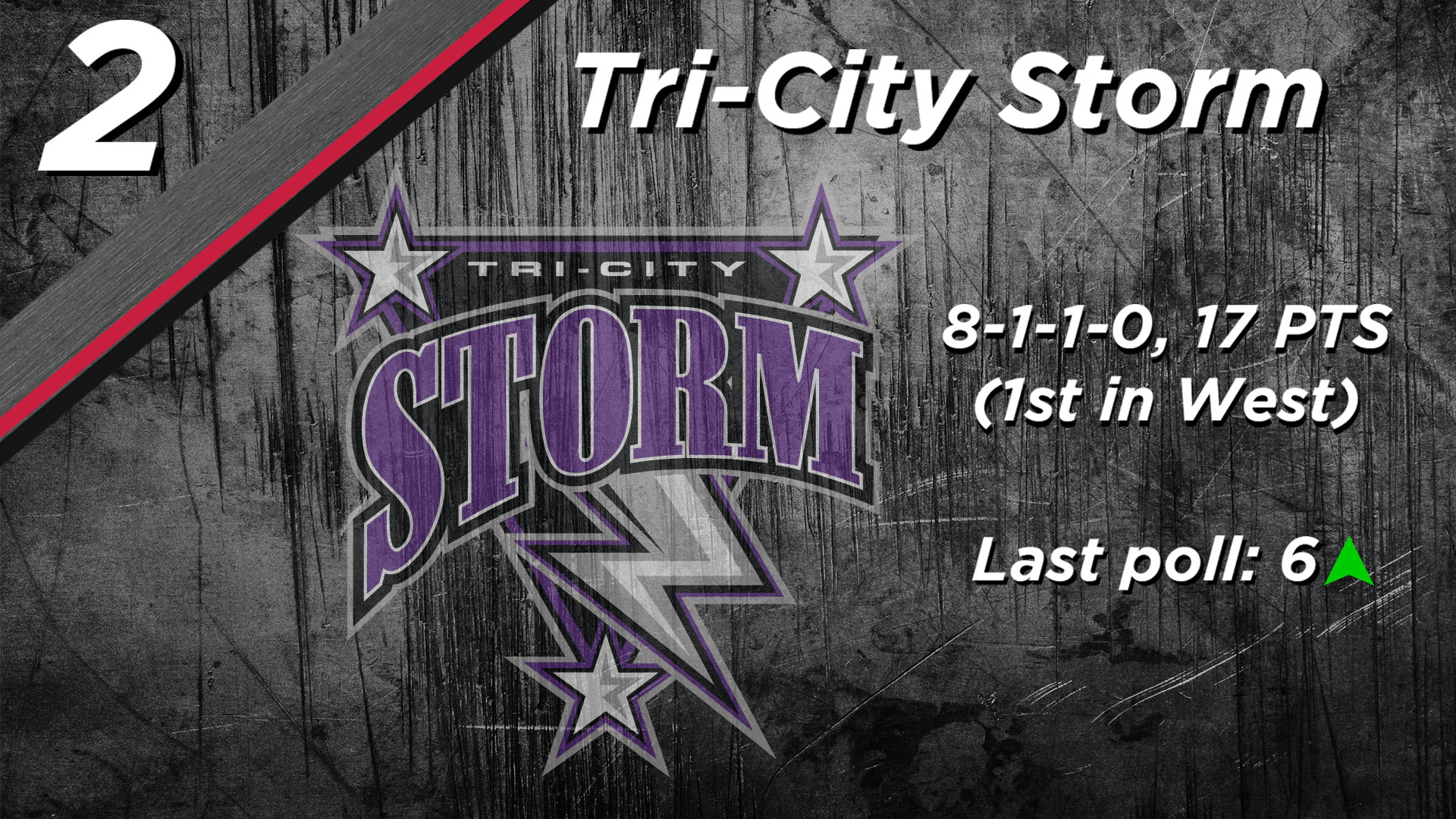 The Storm, much like the 2017-18 season, are off to a fast start. They opened the season with five straight wins and are currently unbeaten in regulation in their last four contests, having won their last two games of October via the shootout. Just like last season, defense and goaltending are the reasons for the Storm's success. The team has only allowed 19 goals, the fewest in the USHL. This is thanks, in large part, to the outstanding play of rookie goaltender Isaiah Saville. The University of Nebraska Omaha commit has been the best netminder in the USHL through five weeks, posting a 1.54 GAA and .941 SV% to lead the league in both categories. He has been named USHL Goaltender of the Week twice in the last three weeks for his efforts. 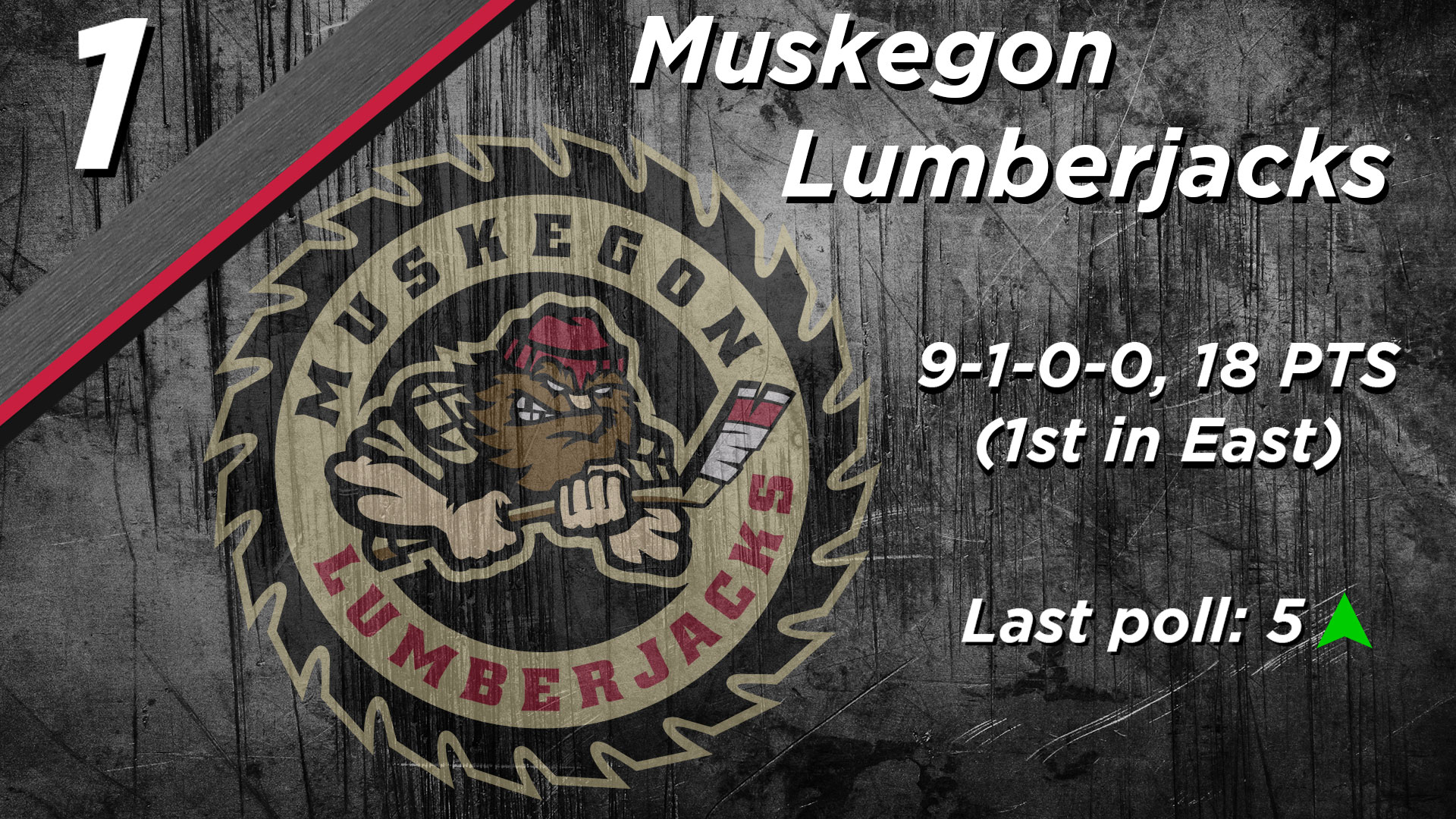 Muskegon was the last USHL team to lose a game, as they won their first eight contests of the season before falling to Team USA's U18 team on Oct. 27. They opened November with a victory over the U18s, avenging their first loss, to move to 9-1-0-0 on the season and remain atop the USHL standings. Both Bobby Lynch and Chicago Blackhawks prospect Mikael Hakkarainen have vaulted into a tie for ninth in USHL scoring with 12 points each, thanks in part to their three-point peformances in their last game, a 6-4 victory over Team USA on Thursday morning. Lynch is riding a four-game point streak, with eight points (5G, 3A) in that span, while Hakkarainen has earned at least one point in five of the six games he's played since returning from Providence College, including four multi-point efforts. Muskegon has also been buoyed by goaltender Brandon Bussi. The St. Lawrence commit currently holds a 9-1-0-0 record to go along with a 2.51 GAA (3rd in USHL) and .917 SV% (4th in USHL).