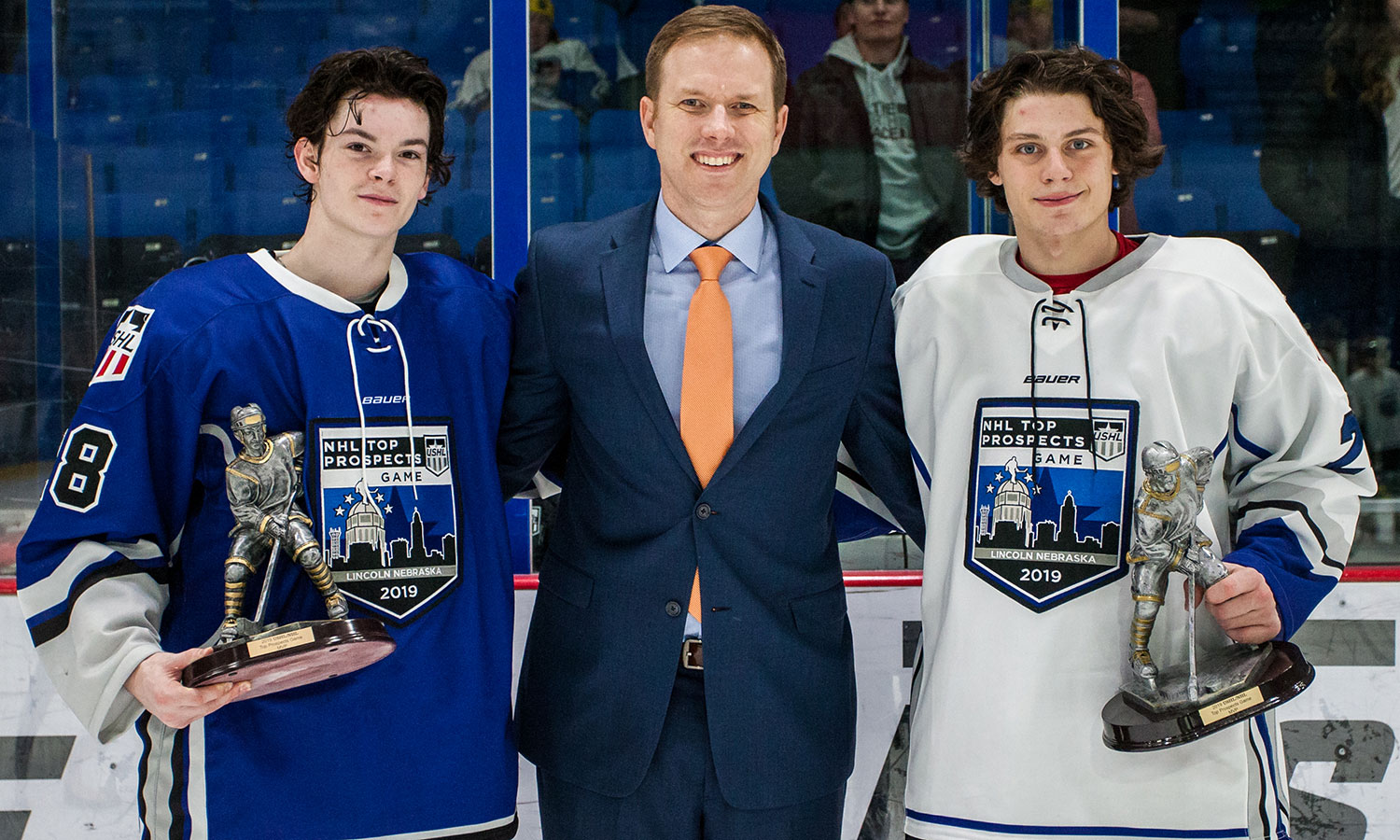 The game was an exciting, up-and-down contest that featured a combined eight goals and 59 shots between the two sides. The first 12:40 of the game were played without a goal, marking the longest start to a game in USHL/NHL Top Prospects Game history with neither side finding the back of the net. Phillips broke the scoreless tie at the aforementioned 12:40 mark, with an assist to Meyer. Just 90 seconds later, Jack Malone (Youngstown Phantoms) doubled the Team West lead off a nice helper from Matt Brown (Des Moines Buccaneers).

After taking a 2-0 lead into the intermission, Team West extended their lead to three less than three minutes into the middle frame, with Phillips finding Meyer all alone in front of the net. Team East responded at the 5:17 mark of the period, as Lynden Breen (Central Illinois Flying Aces) skated up the middle of the ice and fired a shot into the back of the net to make it a 3-1 game. It remained a 3-1 game before Shane Pinto (Lincoln Stars) and Robert Mastrosimone (Chicago Steel) traded goals less than a minute apart late in the second, giving Team West the 4-2 advantage heading into the third and final period.

Just over five minutes into the final frame, Kaden Bohlsen (Fargo Force) gave Team West their second three-goal cushion of the evening before Mastrosimone scored his second goal of the game to complete the scoring.

Isaiah Saville (Tri-City Storm) and Keegan Karki (Muskegon Lumberjacks) started between the pipes for Team West and Team East, respectively. Both goaltenders played 29:19, with Saville making 10 saves on 11 shots and Karki turning 13 of the 16 attempts he faced aside. Ben Kraws (Sioux City Musketeers) came on in relief for Saville and made 16 saves, while Logan Stein (Waterloo Black Hawks) replaced Karki and stopped 12 of the 14 shots he faced.

Following his two-point (1G, 1A) performance, Phillips was named Team West MVP, while Mastrosimone was named Team East MVP thanks to his two-goal night. Team West has now won two of the last three USHL/NHL Top Prospects Games, with Team East now holding a 4-3-0-0 record all-time at the event.

Jack Malone (@YtownPhantoms) buries the rebound to put Team West up by a pair! #WhosNext pic.twitter.com/YP7pNO6Rig

Lynden Breen (@ciflyingaces) dashes in and snipes to get Team East on the board! #WhosNext pic.twitter.com/wqC4HW1txm

This Logan Stein (@BlckHawksHockey) save, in a word: