USHL Players of the Week: Week 21 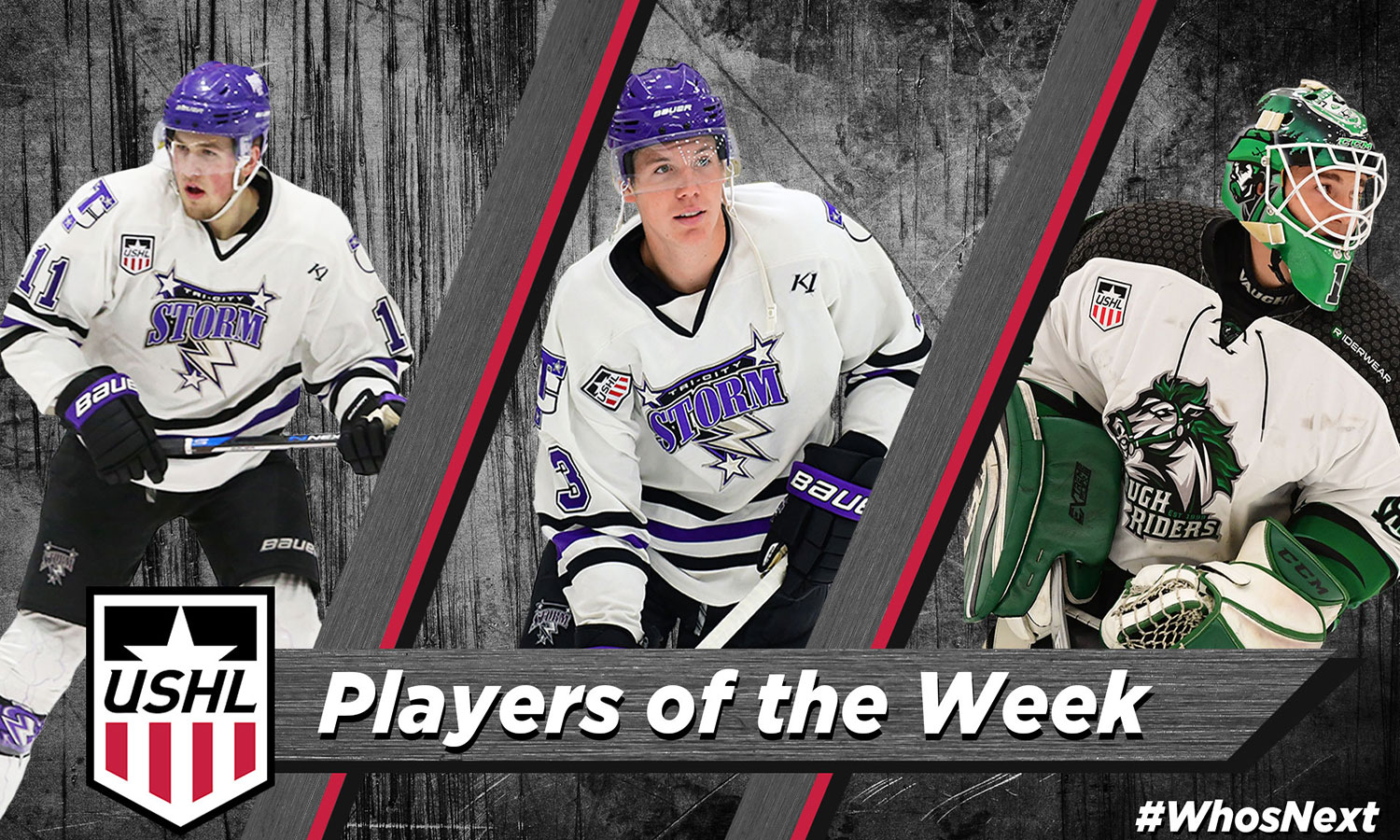 The United States Hockey League announced the Forward, Defenseman and Goaltender of the Week for Week 21 of the 2018-19 season. Tri-City Storm forward Brendan Furry earned his second weekly honor of the season, Tri-City Storm defenseman Ronnie Attard was named Defenseman of the Week for the second straight week and fourth time overall and Cedar Rapids RoughRiders goaltender Blake Pietila was recognized as Goaltender of the Week for the third time. Furry registered eight points in three games over the weekend, including a hat trick on Sunday in Waterloo, Attard made history as he broke the USHL Tier 1 (2002-present) record for most goals by a defenseman in a season in the midst of a five-point weekend, and Pietila helped extend the Cedar Rapids winning streak to four games with a pair of victories in which he allowed just three goals. The USHL is America’s only Tier 1 junior hockey league, and continues to lead the world in the advancement of Division I college hockey athletes. 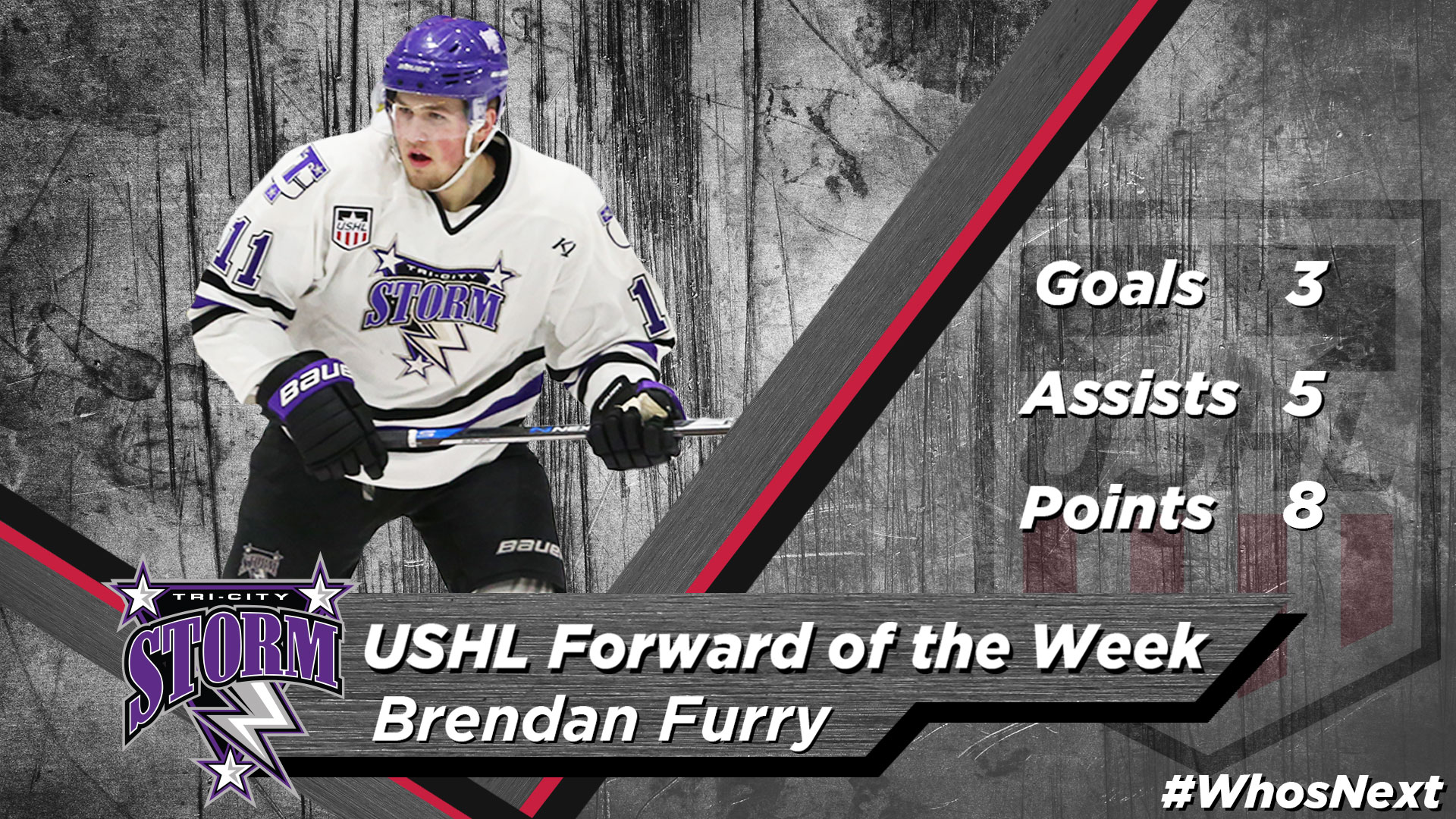 Furry dished out three assists in Friday's 5-2 win at Central Illinois, added another helper on Saturday to help the Storm to a weekend sweep of the Flying Aces and recorded four points on Sunday in a 6-3 win in Waterloo, including his first USHL hat trick. He has now registered 39 points (15G, 24A) on the season, good for third on the Storm. His 15 goals place him fourth on the team, while his 24 assists are also good for third. He is in the midst of a four-game point streak dating back to Feb. 9, with nine points (3G, 6A) and a pair of multi-point performances in that span, and has put up 21 points (7G, 14A) in his 19 games with Tri-City since coming over in a trade with Omaha on Dec. 27.  A native of Toledo, OH, Furry is in his second USHL season. He recorded 40 points (17G, 23A) in 59 games with Omaha last season and has 71 points (29G, 42A) in 83 career USHL games. Prior to his time in the USHL, he played for the Amarillo Bulls (NAHL) and Belle Tire (T1EHL). This is Furry's second USHL weekly award of the season, as he was previously named Forward of the Week on Jan. 14. 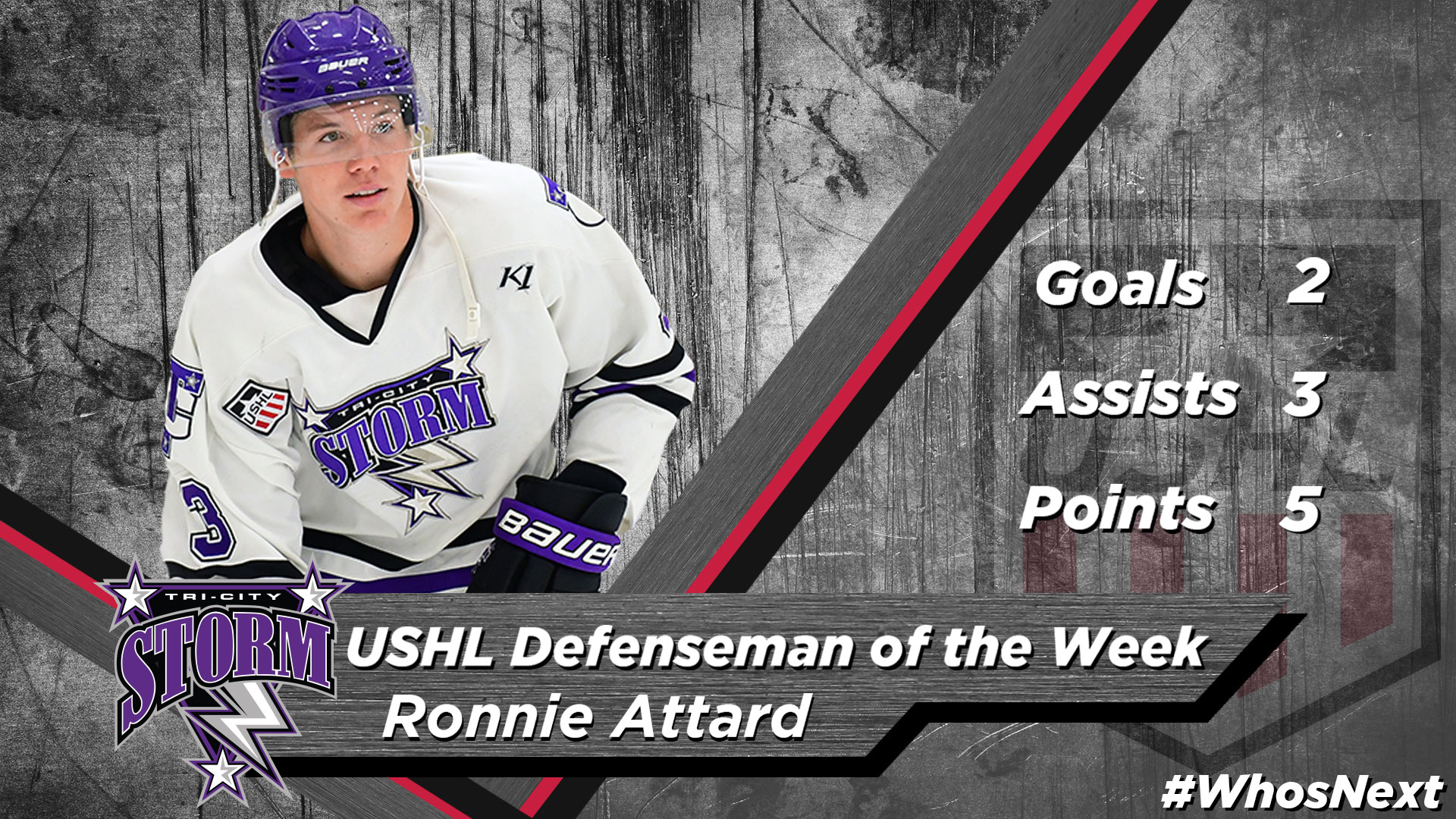 It was a record-breaking weekend for Attard, who scored a goal and added an assist on Saturday before adding another goal and dishing out two more assists on Sunday. With his goal on Sunday, his 20th of the season, he broke the USHL Tier 1 (2002-present) record for most goals in a season by a defenseman, a record that was previously held by three players (Eddie Del Grosso, Indiana Ice - 2005-06; Blake Kessel, Waterloo Black Hawks - 2007-08; Matt Donovan, Cedar Rapids RoughRiders - 2008-09). Attard is now up to 42 points (20G, 22A) on the season to lead all Storm players as well as all USHL defensemen. His 20 goals are tied for 10th in the USHL, while his 22 assists are good for fourth among Tri-City skaters. He also leads the USHL with a +40 rating. The Western Michigan University commit has led all USHL players in scoring, recording 27 points (13G, 14A) in 16 games, as well as recorded a +24 rating, during that stretch. This is Attard's second weekly award in a row and fourth overall this season, as he was previously named USHL Defenseman of the Week on Dec. 3, Jan. 14 as well as Feb. 11. 2018-19 marks Attard's third season in the USHL. He has played in 118 career games, all with the Storm, amassing 46 points (22G, 24A) in those contests. A White Lake, MI native, Attard was selected by Tri-City in the 10th round, 158th overall in the 2018 USHL Phase I Draft won a gold medal with Team USA at the 2018 World Junior A Challenge and was ranked 143 among North American skaters on the NHL Central Scouting Midterm Rankings in January. Prior to his time in the USHL, Attard skated for Victory Honda (T1EHL). 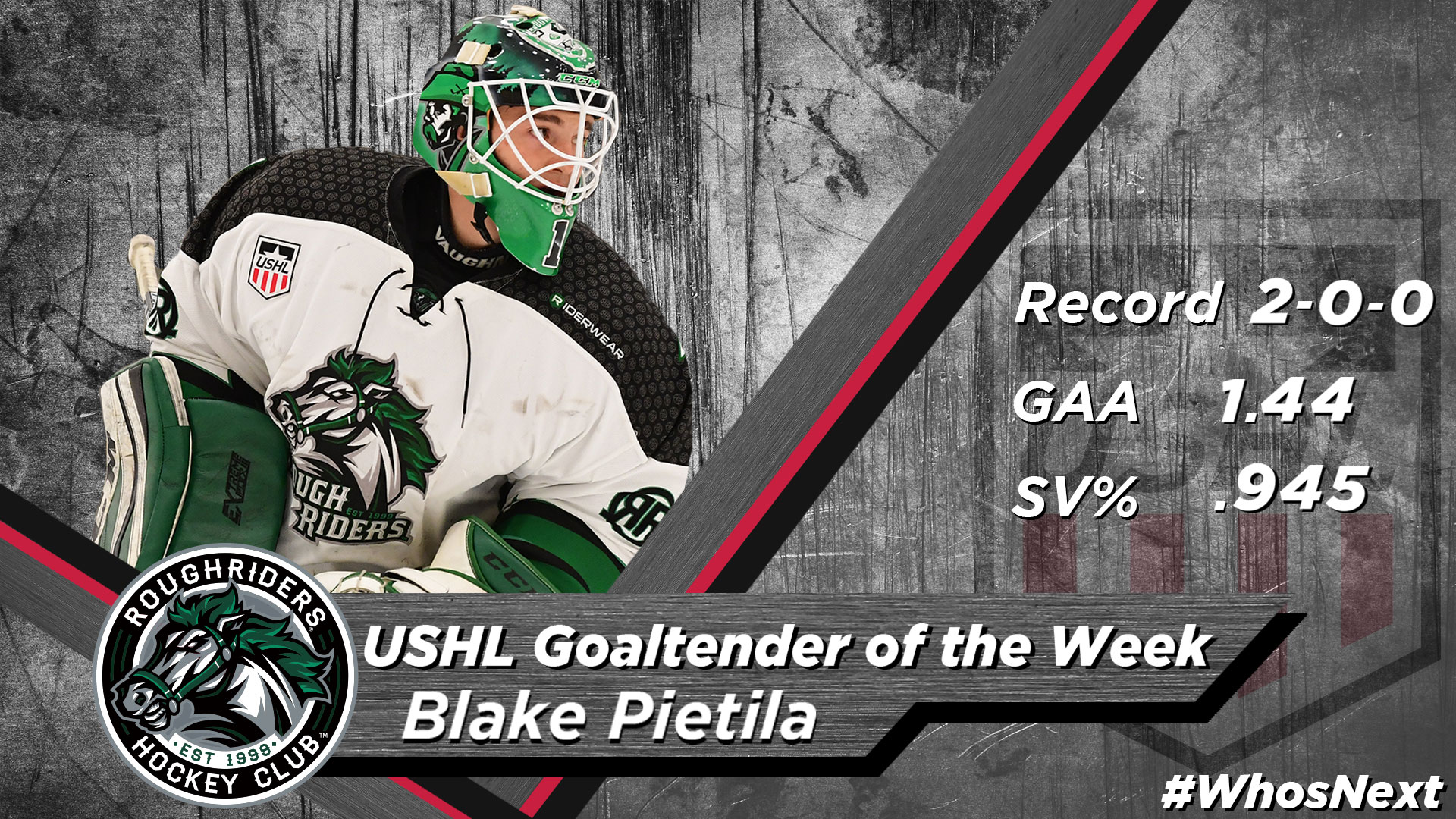 Pietila stopped 23 of the 24 shots he faced in a victory over the Waterloo Black Hawks on Saturday before turning away 29 of the 31 shots that came his way on Sunday in Green Bay. He was also 2-for-2 in the shootout to give the RoughRiders a 3-2 win over the Gamblers and extend the team's winning streak to four games. The Michigan Tech is now sporting a 18-10-2-1 record, a 2.57 GAA and .909 SV%. His 18 wins and 2.57 GAA are both fifth among USHL goaltenders, while his .909 SV% places him sixth in the USHL. He has also won nine of his last 11 starts dating back to Jan. 4 to help Cedar Rapids climb into third place in the Eastern Conference standings. This is Pietila's third weekly award this season, and second in three weeks, as he was previously named USHL Goaltender of the Week on Oct. 1 and Feb. 4. In addition to this strong USHL play, he helped Team USA to a gold medal at the 2018 World Junior A Challenge, posting a 2.27 GAA and .917 SV% in a three-game span. The Howell, MI native played in 32 games with Cedar Rapids a year ago, his first USHL season, finishing with a 3.03 GAA and .903 SV%. Pietila played for Little Caesars and Compuware prior to his time in the USHL.