With the WCHA, Robertson has improved the experience for both the student-athlete and fans. The St. Paul, Minn. native brought playoff games back to campuses, championed safety provisions and introduced the 3-on-3 overtime and shootout format to the WCHA regular season for the first time in league history. Robertson played a pivotal role in expanding partnerships, adding collaborations and refining Association governance all while reducing operating expenses.

Prior to his experience in the WCHA, Robertson was part of the inception of the Mighty Ducks of Anaheim (NHL), Minnesota Wild (NHL), Minnesota Timberwolves (NBA) and Minnesota Swarm (MLL) as well as four different sporting venues including the Xcel Energy Center, Target Center, Arrowhead Pond of Anaheim and Edison International Field.

From 1998-2011, Robertson served as the Vice President of Communications and Broadcasting for the Minnesota Wild and Minnesota Sports & Entertainment. Robertson helped establish the franchise and events it hosted while leading the media relations, community relations, publications and broadcasting departments. While with the Wild, Robertson and his staff won the Dick Dillman Award, which is given to the NHL’s top public relations staff, for their efforts during the 2005-06 season. In 2003, The Hockey News named the Minnesota Wild as the NHL’s best media relations department. In 2000, Robertson was named one of the “100 People to Watch” in Minnesota (Minneapolis/Saint Paul Magazine) and named to the area’s “40 Under 40” (Twin Cities Business Journal).

Prior to working with the Wild, Robertson served as the Director of Communications for The Walt Disney Company (1993-98), leading communications efforts for the Mighty Ducks of Anaheim (NHL) and Anaheim Angels (MLB). Robertson also served in the same role with the Minnesota Timberwolves (1989-93). While with the Ducks, Robertson’s staff won the Dick Dillman Award in four-straight seasons (1994-97).

Robertson’s experience in hockey also includes strategic planning and serving as the main liaison for the 2004 NHL All-Star Weekend, 2004 World Cup of Hockey, and 2011 NHL Draft as well as serving as media relations liaison for the men’s and women’s Team USA Olympic ice hockey teams in 2002 and 2006.

A native of St. Paul, Minn., Robertson is the father of Brett and Brooke and the son of late Norbert Robertson who played hockey collegiately at University of Minnesota and University of St. Thomas. Mike, Robertson’s older brother, played college hockey for Boston College. 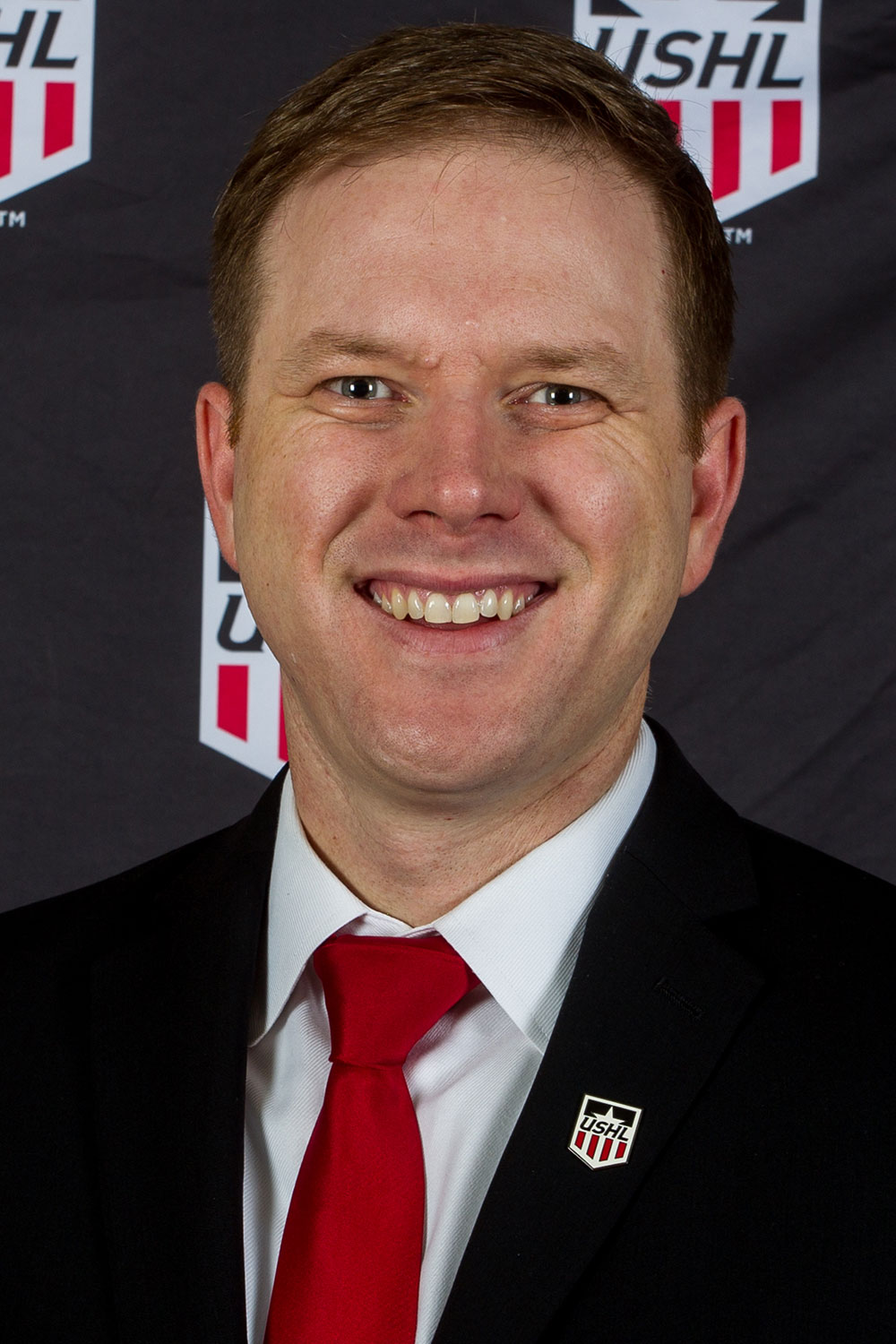 Denny Scanlon was named the USHL's Deputy Commissioner in August 2018.

In his role with the USHL, Scanlon is responsible for leading all aspects of USHL hockey operations and other USHL events such as the USHL Development Series.

Scanlon comes to the nation’s only Tier 1 junior hockey league from the North American Hockey League (NAHL), where he spent the past nine seasons as the Vice-President of Hockey Operations. In that role, he oversaw all aspects of hockey operations for the NAHL and provided counsel to member teams on compliance with League rules and Bylaws. He was also responsible for the preparation, review and negotiation of a variety of legal documents for the NAHL.

Scanlon has vast experience at all levels of hockey, including the National Hockey League, where he served as an amateur scout for the New York Islanders from 2008-2011. Prior to joining the Islanders, Scanlon spent five years as Hockey Operations Coordinator for the Minnesota Wild from 2000-2005.

From 2006 through 2009, Scanlon worked for the Minneapolis law firm of Holmes and Associates, where he practiced in the areas of Real Estate and Corporate Law.

Scanlon graduated from Miami University in Oxford, OH in 2000 and earned his Law Degree from the William Mitchell College of Law in St. Paul, MN in 2006. 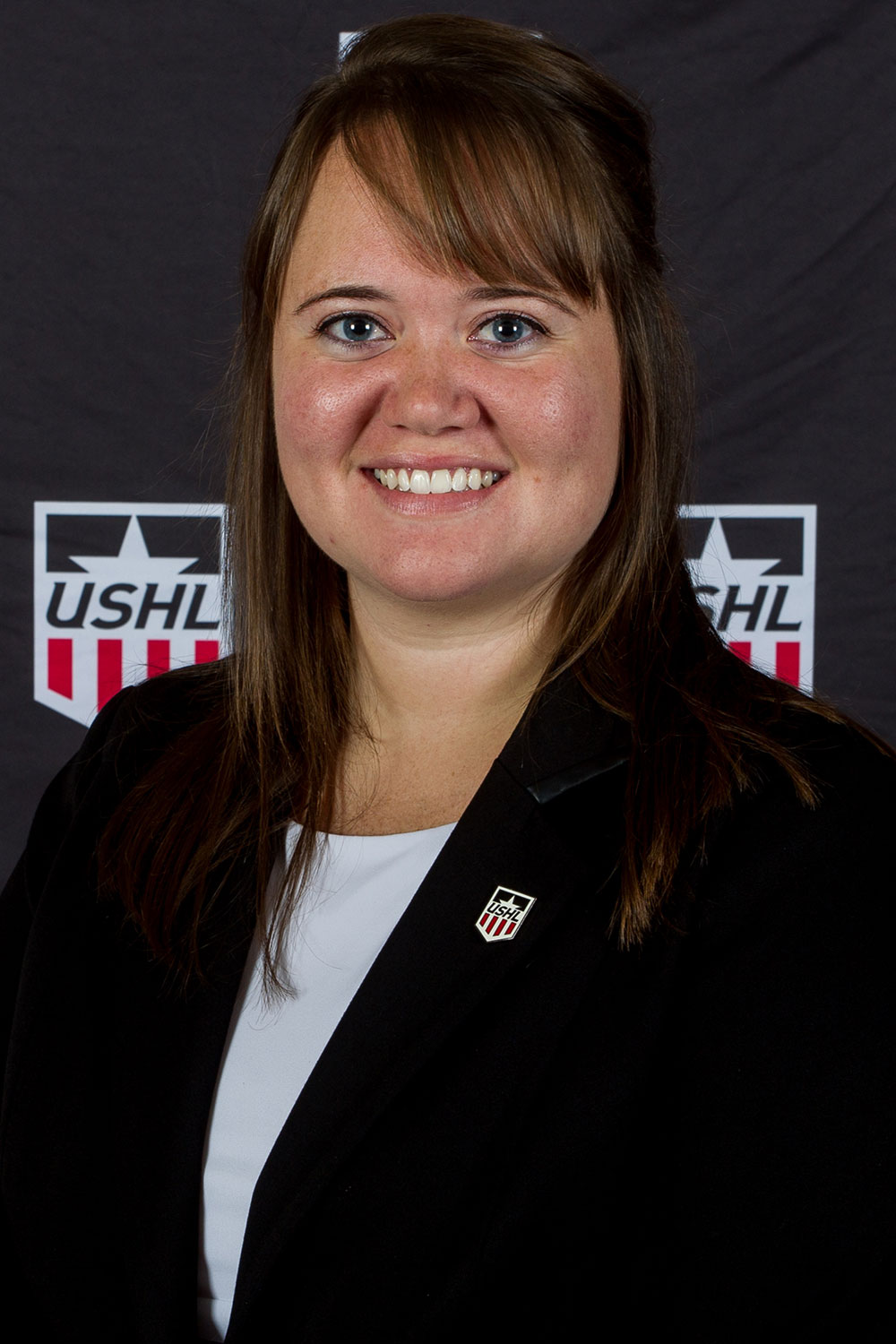 Morgan joined the league office prior to the 2016-17 season, and served as Staff Accountant for more than a year before being promoted to Director of Finance and Accounting in November 2017, becoming the first female league director since 2008.

Morgan oversees all accounting and financial functions of the league office, including, but not limited to: financial report analysis, event budgeting and finance, officiating financial administration, and business handlings with league sponsors and licensees.

Morgan joined the USHL prior to the 2016-17 season after more than three years of Finance Specialist experience at a private bank. Her sports career began as a Staff Intern with the Windy City Thunderbolts in the Frontier League. She holds a Masters degree in Accounting from DePaul University and a bachelor’s degree in Finance from Eastern Illinois University. Morgan currently resides in Orland Park, IL. 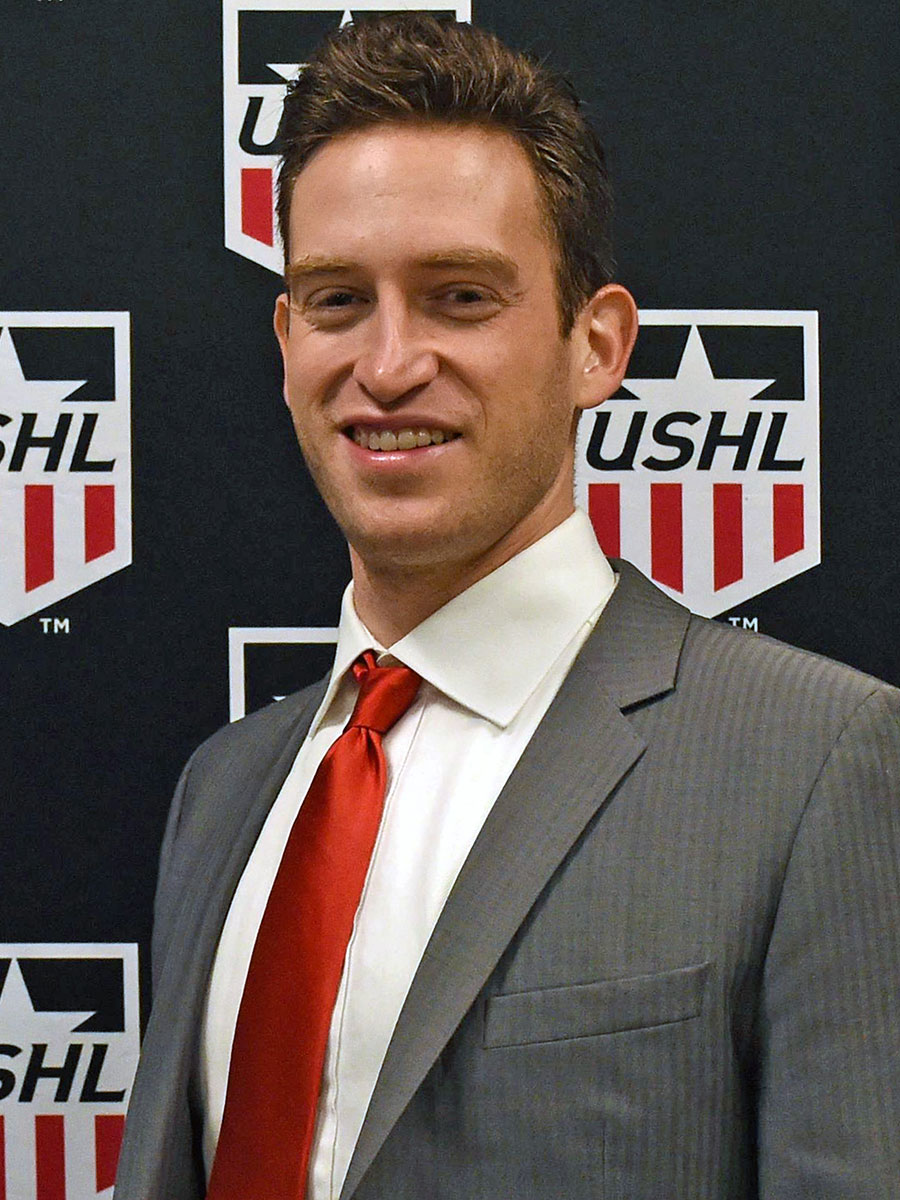 Rand joined the USHL in August 2016 as the Director of Hockey Operations. Rand is responsible for league operations including dissemination of rules and regulations related to roster management, affiliate and injured reserve lists, player safety, transactions, and international transfers. The league’s Hockey Operations department has oversight responsibilities over events, licensing and management of league relationships with vendors that provide services for statistics, player databases, online streaming and player equipment.

Rand comes to the USHL after spending eight seasons with the National Hockey League in a variety of roles. For the past five seasons, Rand served in the NHL’s Department of Player Safety where he was involved in the monitoring of player conduct during league games and preparing presentations for GMs, the NHL Board of Governors and Competition Committee.  He was also involved in managing the 2015 NHL All-Star Weekend’s Skills Competition.

In an earlier role with the NHL, Rand served as the Coordinator of Direct & Digital Marketing where he was involved in the marketing of Game Center Live, the league’s online game streaming service. 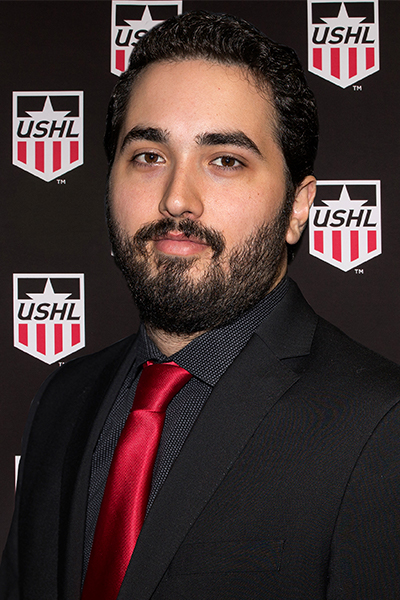 Director of Media and Communications

Meske recently completed his first season as Media Relations Coordinator for the USHL’s Chicago Steel where he was responsible for developing local media relationships, running the Steel’s social media accounts, writing game recaps and press releases and managing the team website. With the USHL, Meske will serve as the point of contact for all media matters, including leading media efforts at the NHL Draft, USHL Combines and Clark Cup Final.

The 24-year old previously served as Media Relations Assistant for the Steel during the end of the 2017-2018 season when the team was named the USHL Media Team of the Year.

Meske is a native of Elgin, Illinois and graduated from Southern Illinois University with a degree in Journalism in 2017. 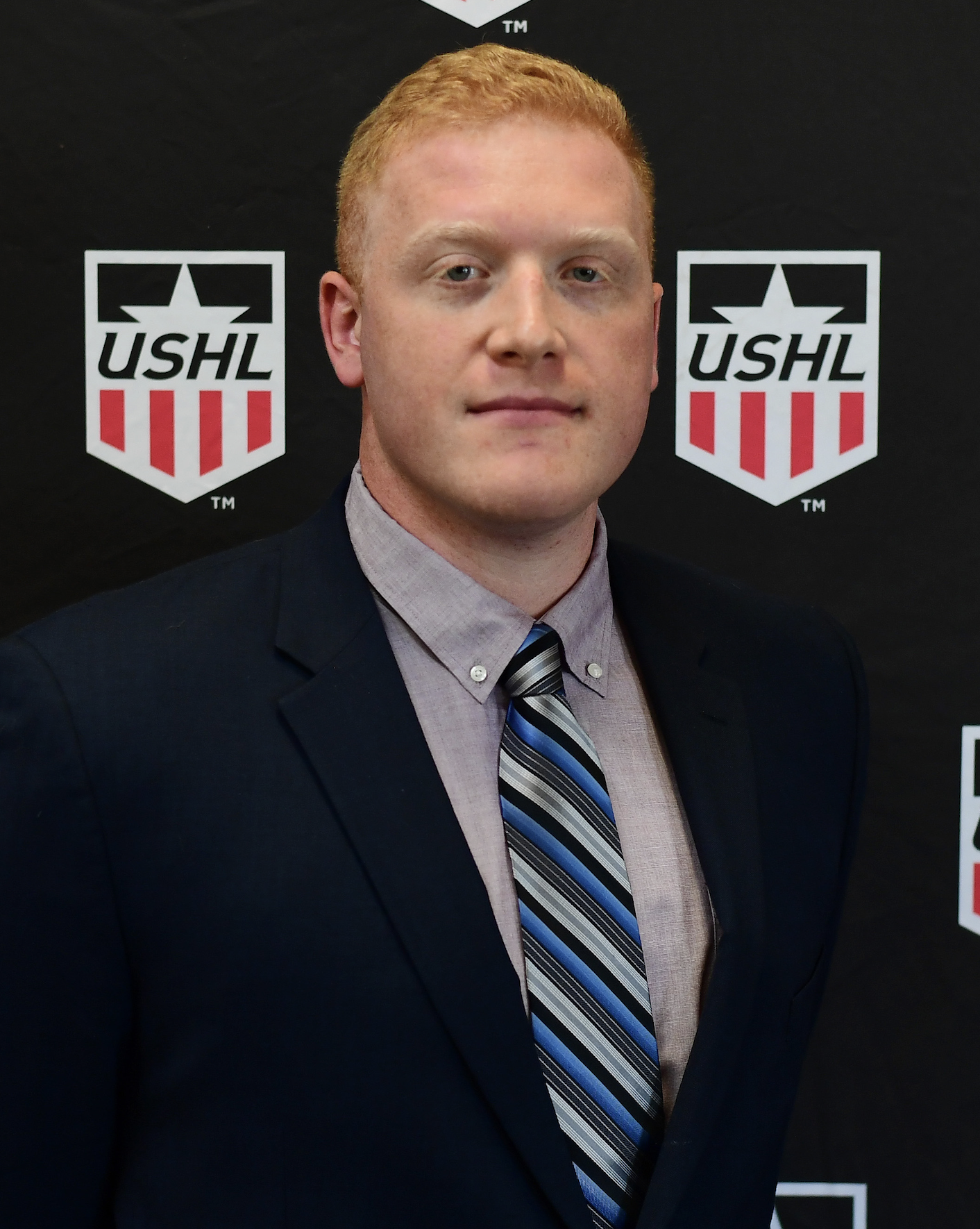 As Director of Player Personnel, Curadi will be responsible for supervision and execution of USHL combines as well as USHL Development series Youth Tournaments in addition to communicating with potential players, parents and advisors on behalf of the league.

Curadi, 28, has a wealth of hockey experience both on and off the ice. The Meriden, Conn. native joins the USHL after three seasons with member club Green Bay Gamblers as the Eastern USA Scout. With the Gamblers, Curadi focused on scouting various leagues across North America and identifying talent for the USHL Draft. He has also worked for the International Scouting Services (ISS Hockey) for the past three seasons as an AHL and NCAA Scout with a focus on finding talent for the NHL, AHL, and NCAA Division I levels as well as evaluating NHL Draft-eligible players, pro free agents and NCAA free agents.

The former Rensselaer Polytechnic Institute (RPI) defenseman served as the team’s alternate captain during his senior season and appeared on the Eastern College Athletic Conference (ECAC) Men’s All-Academic Team in his sophomore, junior and senior seasons. Curadi was also responsible for developing a relationship between RPI and the United Heroes League.

Curadi formerly played in the USHL as a member of the Clark Cup Champion Dubuque Fighting Saints during the 2010-11 season when the defenseman served as alternate captain and registered 11 points (2-9-11) during the regular season. Curadi went on to play for the Adirondack Thunder (ECHL) during the 2015-16 season after his time at RPI. That season, he earned the Team Community Service Award after attending community outreach events including radiothons, ball hockey games and presentations about life as an NCAA athlete. 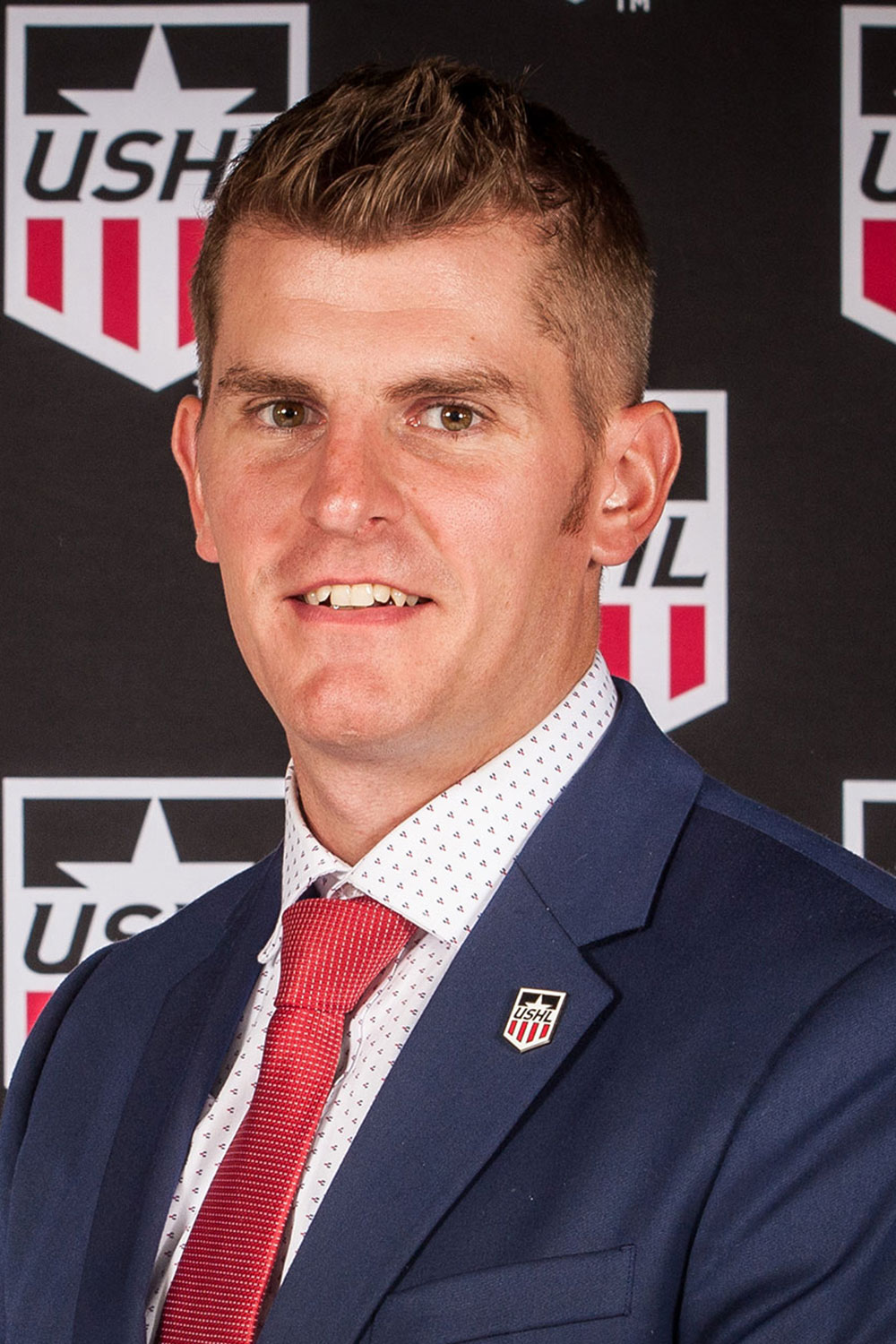 Morgan joined the USHL in October 2017. He will oversee roster transactions, official scoring reports, support the player safety initiatives, enforce USA Hockey rules and regulations, as well as help in the organization and planning of the league events.

Morgan comes to the USHL after a six-year career as an official that spanned the American Hockey League (AHL), ECHL and Central Hockey League (CHL). His career highlights include working four ECHL Kelly Cup Championship series and one CHL championship series. In addition to his career as a linesman, Morgan worked IIHF, USHL and NAHL games through the USA Hockey Officiating Development Program. Morgan was a linesman in the USHL from 2007-2012.

Originally from St. Louis, MO, Morgan studied at Saint Louis University and graduated with a degree in Business Management in 2011. 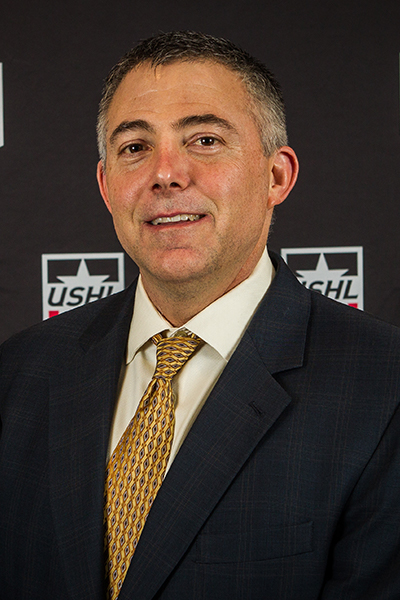 As manager of USA Hockey’s junior officiating development program, Scott Zelkin guides all aspects of the USHL’s officiating program, including assignment and evaluation as well as recruitment and retention.

Zelkin has an extensive on-ice background that made him one of the most highly-accomplished officials in the United States.  After three seasons as a referee in the USHL and graduating from the University of Denver with a degree in Finance, the Chicago native went on to an officiating career in higher levels of hockey, culminating as a referee in the NHL.  In addition to working in the NHL, he has over 1,000 games to his credit in the AHL and IHL, as well as having officiated in multiple IIHF World Championships and the 1990 NCAA Division 1 Men’s Ice Hockey Championship.

Zelkin also spent numerous years working as an instructor in USA Hockey’s Officiating Development Program helping to train some of the best young officials in the United States.  His contributions to hockey earned him an induction to the Illinois Hockey Hall of Fame.

Away from the rink, Zelkin is a competitive triathlete that has completed multiple IRONMAN races.  He qualified for and raced in the USA Triathlon Age Group National Championships and the IRONMAN 70.3 World Championships.

Scott currently resides in suburban Chicago with his wife and two sons. 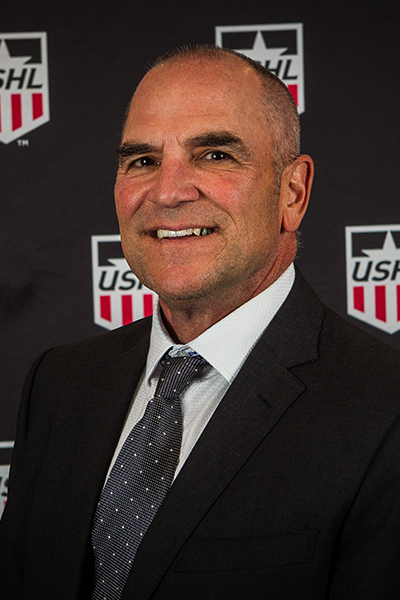 As the Director of Player Safety, LaRue will serve as the Chairman of the Player Safety Committee. LaRue will also administer player supplemental discipline for all games in accordance with the league’s player safety initiative. The player safety initiative is a cumulative penalty system designed to track, intervene and establish standards for supplemental discipline in instances of dangerous play, particularly for repeat offenders.

LaRue, a native of Spokane, Washington, joins the USHL after serving as an NHL referee for 1,222 games, the most by any American referee and ranked eighth overall all-time as of his retirement in 2016. LaRue began his NHL career as a referee in 1991 and went on to officiate the 2009 Stanley Cup Final, becoming only the second-ever American to referee a Stanley Cup Final. He also officiated the 2012 NHL Winter Classic, 2003 NHL All-Star Game and the Olympics in 1988, 2002, 2006, and 2010. LaRue was just the third referee ever to work four separate Olympics and was later honored with the USA Hockey Distinguished Achievement Award in 2011.

With the USHL, Dr. Czarnota will be part of building, managing, and overseeing the USHL Concussion Management Program, including a program that oversees the USHL’s referees and linesmen. Dr. Czarnota will also serve as the primary consultant for the USHL and work with each Member Club’s athletic trainer and medical staff to disseminate relevant information and manage concussion protocol, which Dr. Czarnota has helped to update.

Dr. Czarnota has an extensive background when it comes to hockey, and is currently working with the Canadian Hockey League (Official Neuropsychology Consultant), Hockey Canada, ECHL, Professional Hockey Players Association, as well as providing consultation to many high schools.

Dr. Czarnota is a founding member, and currently the Chair of the Education Committee, of the Sports Neuropsychology Society and is involved with projects and grants that aim to improve all aspects of concussion safety, including education, awareness and services. Dr. Czarnota received his Doctorate in Clinical Psychology from Wayne State University in 1993 and is now also part of an independent private practice in Detroit that centers on the diagnosis and evaluation on traumatic brain injury.